Awesome beauty aside, "Sexual Explosion" has finally secured its place in Modern Contemporary Art History along with the other world-famous nudes of Picasso, Dali and Modigliani. The "Sexual Explosion" phenomena has influenced a whole new generation of surreal artists portraying the nude image. Because of "Sexual Explosion's" daring visuals and sensuous seduction and its liberating mystical imagery, the Warren masterpiece has achieved international respect and praise at last. In spite of the fact that the controversial painting was once banned from public exhibition for being "obscene and sexually explicit," has never been viewed in public, has never been published with limited edition art prints, and has been veiled in mystery and secretly sequestered in an unknown private art collection for decades --- it has nevertheless summited to its destined glory. 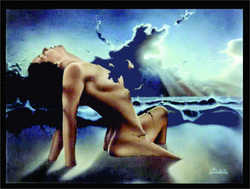 "Sexual Explosion," Jim Warren's majestic but controversial nude painting, once banned in the U.S. as "obscene and sexually explicit," is now named Most Famous Nude Painting in Modern Contemporary Art since the renowned Picasso, Dali and Modigliani nudes.

"Sexual Explosion," Jim Warren's mystical but controversial nude painting, once banned in the United States from public exhibition in the 1970's for being "obscene and sexually explicit," is now named the Most Famous Nude Painting in Modern Contemporary Art since the renowned nudes of the Latin European masters Picasso, Dali and Modigliani, who dominated that art market. And while Andy Warhol is recognized as the most important American artist of the last century, (his most noted artworks being the iconic Marilyn Monroe series of silk screens) he never painted any major nude paintings.

The controversial Jim Warren "Sexual Explosion" oil on canvas depicts a female nude in a reclining position either on a surreal Dali-inspired beach or on surreal clouds while her body is in a state of exploding ecstasy. This is but one of its intriguing paradoxes that makes "Sexual Explosion" a mysterious and mystical viewing experience.

According to documented evidence that has surfaced from extensive research conducted on behalf of Art Collectors Website (http://www.artcollectorswebsite.com), a leading online art gallery, "Sexual Explosion" now ranks as today's Most Famous Nude Artwork by a Living Painter.

Interestingly, another Jim Warren original nude painting "Re-Birth," has also achieved world-wide viewing attention and status along with "Benefits Supervisor Sleeping," painted by another living artist, Lucien Freud from Britain. The "Benefits Supervisor Sleeping" artwork is also renowned for its controversial explicit imagery and recently fetched $33 million dollars (USD) at a Christies Auction in New York, on May 14, 2008.

As one of the runners-up to "Sexual Explosion," the "Re-Birth" nude is positioned to eventually challenge the rankings of the Most Famous Nudes sometime in the future, it was speculated in the report. "Re-Birth" depicts two nude figures in a surreal beach setting or between heaven and earth or heaven and hell, one in an early state of disintegration and the other in an adult state of re-birth. This painting, too, has intriguing hidden secrets one discovers upon closer observation of its details.

Surrealist Jim Warren, born near Hollywood, California in 1946, is recognized for his nudes and horse images, especially among entertainment celebrities from the film and music industry in Hollywood, where he is widely collected. However, Warren attained international fame in 1981 by winning the Grammy Award for the cover art of the "Against the Wind" album by Bob Seger which to date has sold over 6,000,000 copies, thus making his iconic artwork the Most Famous Horse image in Modern Contemporary Art. The original painting for "Against the Wind" is currently in the permanent Art Collection of The Rock and Roll Hall of Fame Museum in Cleveland, Ohio.

However, the Jim Warren original prototype for the "Against the Wind" painting, entitled "Running Wild," which has been renowned in its own right for decades for its fabled wild horses, has been viewed on the Art Collectors Website by special invitation along with a youtube art video entitled "Running Wild World-Famous Horse Icon Painting by Jim Warren - Prototype for Against the Wind." The artwork is currently in a private collection and has never been exhibited publicly.

Based on further Google research and on youtube documentation, it is reported that there are no less than five art videos featuring "Sexual Explosion" on youtube and various other art and social media video websites, under the following titles:

Furthermore, photo images of the "Sexual Explosion" painting have been seen by countless millions within the last 24 months on two leading online art galleries and showcases: http://www.artbrokerage.com and http://www.artcollectorswebsite.com. Art Brokerage is ranked in the top 3% of the world's most visited websites and the Art Collectors Website is ranked in the top 10%, based on statistics and analytics released by Alexa, an internet research information organization that tracks and ranks over 5,000,000 websites on traffic and visitors details.

The "Sexual Explosion" painting's place in Modern Art history was further established by Google Search (March 1, 2011) when "Sexual Explosion" was listed on page #1 in position #8 under the heading: 10 Most Important or Famous Nude Paintings.

In addition, "Sexual Explosion" placed in #2 position directly behind Picasso's Cubist Masterpiece "Nude, Green Leaves & Bust" on Google Search "Images" (March 11, 2011) under the heading: Most Controversial Nudes in the World. "Nude, Green Leaves & Bust" was auctioned at Christies in New York on May 4,2010 for $106.5 million dollars (USD) where it posted a world-record price at that time.

Indeed, the "Sexual Explosion" phenomena has been influencing a whole new generation of surreal artists portraying the nude image in Contemporary Modern Art. Because of its daring visual seduction and liberating mystical imagery, "Sexual Explosion" has continued to attract respect in spite of the fact that the painting has never been exhibited in public, or re-produced in limited edition art prints and has been sequestered in an unknown private art collection for decades --- veiled in mystery.