Luis Bunuel | Angel Orensanz: reProjections in the Armory Show and Beyond

The Angel Orensanz Foundation in New York is presenting a two weeks exhibition, with an opening as part of the Armory Show, in which an anthology of Luis Bunuel movies is interlaced with Orensanz's films and sculptures. The soaring spaces of the Orensanz Foundation in New York are bathed in a dense, hypnotizing red. Both artists are natives of Aragon; they became friends and though working in different medium they closely followed each other's activities. For more than 10 years "Razor in the Eye", the sculpture by Angel Orensanz commissioned by the city of Bunuel's birth place for his centennial stands as a prominent public art piece in Calanda, Spain. 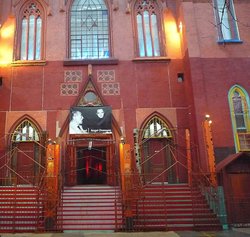 Angel Orensanz was a fervent admirer of Luis Bunuel's personality and filmography since very early on. In a large mural relief at Ciudad Universitaria in Barcelona in the 1970s Orensanz included the only public portrait of Bunuel in Spain. This is a large ceramic mural relief portraying him together with Unamuno, Picasso and Machado.

Orensanz soon departed for Paris to work as a sculptor. When Bunuel returned to Paris they became friends and Orensanz visited the film shoots of the world master film director such as "Belle de Jour" and "La Voie Lactee."

Luis Bunuel had his first film "Un Chien Andalou" premiered in 1928 at Studio 28 on the Montmartre in Paris. That film, created with the assistance of Dali, changed the history of moviemaking for ever and was soon followed by L'Age d'Or. The shocking scene of "Un Chien Andalou", the sequence in which the man slits the woman's eyeball with the razor, in parallel with a thin cloud crossing the full moon, is considered one of the most striking images of cinematography.

Something in common between the world film author and the Spanish/American sculptor was the land of Aragon (Northern Spain) where both were born and from where both derived a fierce individualism and a passion for the aesthetics of ultra reality.

When in 2000 the town of Calanda Spain, the birthplace of Bunuel, commissioned Angel Orensanz to build a sculpture to Luis Bunuel for his centennial, Orensanz erected a 10 feet high steel tree that weighted over a ton, crowned with a strong, slit eye, entitled "Razor in the Eye". Inspired by the scene of "Un Chien Andalou" the sculpture was made of rusted steel red enamel with a cylinder about three feet high placed on a wide base with figurative iconography. The sphere placed on the top with three triangular blades riveted to each side with expressionist figures evoked scenes from Bunuel movies. The sculpture now stands in the heart of town in Calanda as prominent public art piece of the city.

Before bringing it to its final destination, Orensanz paraded the sculpture through the most meaningful locales of Bunuel such as Madrid and Venice covering territories so loved by the filmmaker. For a month the statue was on display in Paris, where Bunuel shot memorable sequences of his movies; in Zaragoza, the city where Bunuel carried his pre-university education and it was on view there, on Plaza Nuestra Señora del Pilar for one week, right before reaching Calanda.

Angel Orensanz also used to meet up with Luis Bunuel when the surrealist genius returned year after year to his town of Calanda in Lower Aragon to attend the massive, thundering drums parades. Then, just recently there was a mysterious concurrence. Angel Orensanz was looking in the early Spring of 2010 for a sea coast to shoot  his emblematic "Descent into the Abyss", a reprise of the catastrophe of the Gulf of Mexico, made into forbidden zone by the oil spill. Friends took him to the Costa Brava near Barcelona where Orensanz descended to the depth of the Mediterranean to be filmed and photographed for his upcoming exhibition series. As it turned out later it happened to be the rocky seashore where Bunuel and Dali used to spend time together and where Bunuel later shot scenes for his landmark film "L'Age d'Or".

If you open some of the books on Orensanz's art, you can read this comment by Bunuel in an interview about Angel Orensanz "…Right now I have people in Paris begging me with four or five movie projects. They have the money, they have everything, but I will not move a finger. I think that something similar happened to Orensanz. He is a real artist, his personal narratives come and go out of the stories that his pieces narrate in cascades and upsurges. True artists live, move and create in solitude…"

Luis Bunuel passed through New York, working at the film section of the Museum of Modern Art in the 1940's. Angel Orensanz planted permanently his roots in New York in the 1980's. His film work is now part of the film library of MOMA.

"Razor in the Eye" by Angel OrensanzCalanda, Spain