This Life Sciences educational game for kids 3 – 7 years old lets kids learn tons of interesting animal facts such as animal physical appearance, size, living environment, eating and sleeping habits, etc while having tons of fun! Produced by the developers behind the award winning PBS KIDS PLAY! and CBC WONDERWORLD online learning programs, this app is the first in the iLearnWith educational program, which is designed to help kids get ready for school, one app at a time. 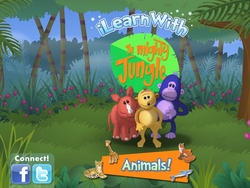 “ We have developed over 100 online educational games for young children over the past 5 years. We are very excited to apply our expertise to touch screens, and particularly to the iPad" says Guillaume Aniorte, cofounder of Tribal Nova

The Mighty Jungle animals are hiding in the jungle. The child has to help Babu the Meerkat seek his friends, by matching the clues to the animals they have met on their way.

This app, which has been developed with child developmental psychologists and educators, based on National Standards, has three levels, increasing in complexity, details and subject covered. Moreover, each level contains a mechanism that adjusts the difficulty based on the child’s success rate. These elements combined enable the game to meet children’s developmental needs regardless if they are 3 or 7 years old.

This app was specifically produced for the iPad large screen. The retail price is 2.99$ with a special launch price of $0.99 from March 15th to March 22nd. More information can be found at http://www.ilearnwith.com .

“ We have developed over 100 online educational games for young children over the past 5 years. We are very excited to apply our expertise to touch screens, and particularly to the iPad because the screen size and resolution really allow us to develop high quality games, with truly educational content and gameplay “ says Guillaume Aniorte, cofounder of Tribal Nova.

“Since there were already many letters or early math apps in the App store, we decided to start the line with Animals!, a key Life Sciences subject taught in preschool and kindergarten and a subject young children love. We will release language, literacy and math apps later this year” adds Pierre Le Lann, Tribal Nova’s other cofounder.

About the iLearnWith educational program
iLearnWith is a cross curricular game-based learning program that helps prepare children for school, while having fun, one app at a time. It is produced by the developers behind the award winning PBS KIDS PLAY! and CBC Wonderworld online learning programs.
With self adjusting levels of difficulty, the games are designed to adapt to the child's developmental needs across a full breadth of subjects, such as, math, science, literacy, language development, social studies, creativity and much more. Games are developed based on National Standards with the help of educators and child psychologists. Each difficulty level corresponds to what a child is supposed to learn at a certain age: 3/4, 4/5 and 5/6 years old. All games feature friendly characters from popular TV shows broadcast around the globe.