All songs are available worldwide in Mp3 and CD format exclusively from the official website SanandaMaitreya.com and at the link : http://www.Zooathalon.com 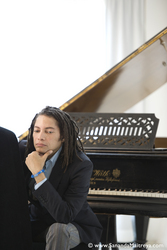 All songs are written, arranged, produced and performed by Sananda Maitreya. The project was recorded in Milano - Italy, where the artist has lived with his family since 2002.

THE SPHINX is the artist’s 8th studio album and his 16th project (including live albums releases).

All his productions are available at the official website: http://www.SanandaMaitreya.com/ecommerce .

Artist, composer, arranger, producer, multi-instrumentalist, entrepreneur and Post Millennium Rocker.
SANANDA MAITREYA was born in New York U.S.A. on March 15th 1962. He plays the four basic instruments of Rock: drums, bass, guitar and keyboards; as well as a few others instruments besides and he can never remember a time when music wasn't playing in his head. From the beginning of his professional career he has personally written arranged, produced and performed all his music and has also collaborated with other top artists and producers. He was and remains a fan of all kinds of music and is committed to completing his own unique vision of what music can be as filtered through his own set of circumstances and the truth of his own nature. Sananda started his career as Terence Trent D’Arby, at the age of 33 he became Sananda Maitreya, which is since 2001 both his legal and artistic name.

In the new album intro Sananda introduces the Zooathalon:
“Welcome to the Zooathalon:
The archetypes of Babylon and the wheel of life that turns on and on – Think Sphinx!”
What is The Zooathalon?
A.    The parade of psychological and symbolic archetypes relating to the progress of the human mind through the wheel of time. This includes the animals & persons representing Babylon, The Zodiac, the movement of the Stars, Totems, Spirits, Gods & Myths. The psyche’s procession of the equinoxes through the gallery of its projection through space-time with imagination, manifestation, observation, meditation as well as action and reflection as its guiding lights. Essentially all of us here in our masquerades in this funky parade down the electric boulevards of our life. Don’t run with scissors and blades!
B.    A collection of stories, poems and aphorism to be found scattered throughout http://www.Zooathalon.com and the writings collected at http://www.SanandaMaitreya.com/writings today!
The Zooathalon takes place all around us every day and we take our place in it.
Please visit the website for full lyrics, credits and chapter stories.

Together with "THE SPHINX" release, the artist has released on the same channels, through his label Treehouse Publishing "THE SPHINX - INSTRUMENTALS" and a live album called "Confessions of a Zooathaholic", which is the result of the recent European tour he did with his live band 'The Nudge Nudge'.
More live concerts will follow in the summer of 2011.

PS: The Press Office requests that the artist is presented exclusively as Sananda Maitreya in all articles, interviews, titles etc. Thank you for the collaboration.