The International RoboGames 2011: Robots Made of Metal Compete for Medals Made of Gold

The 8th annual RoboGames attracts teams from around the world to compete in 60 different events - from dancing androids to fire-breathing combat robots and autonomous cars to soccer playing droids. 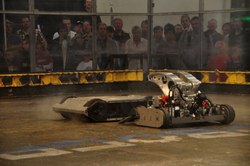 220 pound combat robots fight it out

RoboGames has become an international juggernaut of robotics sports. We're thrilled so many people come to the SF Bay Area with so much new technology, innovation, and even art.

The San Francisco Bay Area has long been a rich playground where hard working cogs in the startup machine wrestle valiantly in their cubicles with the coding questions of the ages. 51 weeks out of the year, it's humdrum workday solving the world's technology problems. And then there's week 52 - RoboGames week.

You can feel a little spark of excitement on Twitter, a slight increase in breathless posts on Facebook and internet forums around the world. There's an increase in business from electronics retailers, hardware manufacturers, and every so often howls of frustration or triumph coming from labs, fabs and unassuming garages. Post doctoral researchers in Indonesia have already got their airline tickets, while machinists in the UK fondle their ratchet sets and stare blankly out into distance, plotting and planning. The ears of DIY blacksmiths in the hinterlands of Texas perk up. Lego-devouring adolescents in California program their robots for the Junior classes.

It's RoboGames Time! Dancing androids, autonomous vehicles, 220 pound combat robots, and even bartending bots will stun a live audience with their dexterity and lethalness. Teams will be competing for gold, silver, and bronze medals against their colleagues from around the world. Fans and their families get their seat cushions ready and their engineering bloodlust activated.

"We're really excited about the number of countries participating this year," says Simone Davalos, one of the organizers. "RoboGames has become an international juggernaut of robotics sports. We're thrilled so many people come to the SF Bay Area with so much new technology, innovation, and even art. Even after 8 years of doing this, I still find it breathtaking - the extent of human ingenuity that comes out in the 'bots. This year, we've got over 600 contestants competing in almost 70 events. We're proud to have over 10 different events for humanoids alone (such as kung fu, acrobatics, soccer, mech warfare, and foot races.)"

"This year will be bigger than ever - including a new TV deal with the Discovery Network!" she excitedly added. "People buying tickets for the live show may end up seeing themselves on TV when it airs on the Science Channel. RoboGames has also secured the Mythbusters' Grant Imahara to host the live event, and adoring fans might finally get their chance to meet him for the price of a ticket."

Of course, there's also the bashing, crashing, smoke and explosions that come from the combat robots most people come to see. Competitors spend months building the destructive bots, to enjoy the thrill of victory, hoping to avoid the agony of bringing their robot back home in buckets. These giant bots fight behind bullet proof panels in a 100,000 pound custom built arena. But it's not all aggression. The event also features robots that make art, artists that makes robots, and just about every other kind of robot you could imagine with participants from Brazil, Mexico, Indonesia, Japan, Korea, across Europe, and other far flung places. All of them ready and raring to bring in "the mechanical awesome." The Japanese lead in sumo robots while Austria has traditionally led in cocktail robotics. Will the USA keep it's #1 medal ranking or will Japan or Brazil finally unseat the host country? Like the human Olympic games, only time will tell.

Nick Donaldson of the UK is considered the "Michael Phelps of Robots." Nick's bot 'Ziggy' has won a gold medal since the event started in 2004 (that's seven year streak!) and Nick is confident he'll keep his run going. "Ziggy is undefeated in the hexapod challenge, and I don't think the contestants this year are up to the challenge. I've also got lots of new robots in some of the other categories that I hope will end up on the medal platform as well."

Davalos points out that RoboGames is an open competition, welcoming anyone to compete in the grand tradition of amateur athletics. RoboGames contestants don't have to be affiliated with a company, school, or other formal organization, and can use any parts they can cobble together. The event attempts to broaden the potential for new robotics technology by casting a wide net for participants, from the single American tinkering alone in his garage to a group of German third graders building one pound robots. Long vaunted as a nexus for the commingling of robotics disciplines, RoboGames tries to connect businesses, researchers, technologists, revolutionaries and audience over one vibrant 3 day weekend.

This year features an expansion of the RoboGames academic symposium, curated by academic chair Heather Knight of Carnegie Mellon University, JPL and MarilynMonrobot.com. Paper presentations from leading academic institutions on present works-in-progress and past research. On the RoboGames Presentation Stage, see speakers such as Eric Singer (internationally acclaimed musical robot artist of lemurbots) and Evan Ackerman of the IEEE Automaton robot blog. From Google Robotics, Ryan Hickman will speak about cloud computing and the sumo events that Google is sponsoring - with a $5,000 total prize purse!

Friday is "Learning Groups Get In Free Day", which is an opportunity for schools, scout troops, and others to RSVP for a fun, free admission for students day at RoboGames.

Facts At A Glance:

About RoboGames:
RoboGames was founded as the ROBOlympics in 2004. Founder David Calkins, who worked with all types of robot competitions, realized the need for cross-pollination between events, as too many robot builders over-specialized within their own field. By bringing builders from combat robotics (mechanical engineering), together with soccer robotics (computer programming), sumo robotics (sensors), androids (motion control), and art robots (aesthetics), robot builders could exchange ideas and learn more. The second goal of RoboGames was to offer recognition to engineers from around the world in varying disciplines with consistent rule-sets and low-cost or free contestant fees. RoboGames never charges kids or primary/secondary schools an entry fee. By offering gold, silver, and bronze medals, and inviting the best robot builders from countries other than just the US, RoboGames gives everyone a chance to excel and compete on a level playing field.