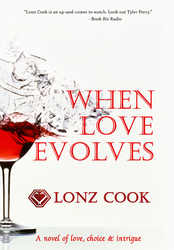 "I am not giving him up without a fight!"

Lonz's writing comes after your friendship and attempts to win your spirit's passion.

The evening will feature brief remarks from Cook, prizes, hor d’oeuvres and a champagne toast. His new book—published by Sterling and Ross Cambridge House publishers—is a love story that sparks an IRS investigation. The distinct plot unfolds in Richmond, VA, and although categorized as a romance/drama, the book strikes the interest of non-traditional romance readers as it crosses gender lines with added action, passion, and investigation.

Cook, also the popular author of the paperback “A Choice to Yield,” is a retired Marine now residing in Atlanta. Known to be an egotistical, hard-yelling, gun-carrying disciplinarian, Cook actually writes stories of the heart versus war.

His new book brings to life the story of a con-artist husband who launders money with the mob and scams millions until an informant sparks an Internal Revenue Service (IRS) investigation. Simone Stephens, the CEO of a major conglomerate, marries Stefan Stephens, a smooth debonair man, who swindles control of her company’s assets. He cons his wife with a successful corporate façade and wins her admiration masking his true intentions. Trust, love, and commitment aren’t enough when Simone lands in an uncompromising position with the IRS, FBI, and crime world because of her conniving husband. Stefan soon abandons his wife shortly after company assets are frozen during the blast of IRS investigators. She struggles to spare her company and calls her sister for assistance. The two recruit the support of Rodney—a lover Simone earlier rejected—to assist in their efforts while murder, intrigue and rage strikes.

ABOUT THE AUTHOR
Lonz Cook, a retired Marine, is also a technology specialist and adjunct professor at Keller School of Management, DeVry University, who has written professionally for several years. His creativity helped Marine service members passionately communicate with loved ones during long deployments. Along his career, friends and relatives repeatedly encouraged him to write creatively. He wrote his first novel in 2005 titled “Good Guys Finish Last,” about women choosing the right man. He currently resides in Atlanta, GA.

ABOUT TWO URBAN LICKS
TWO urban licks has been heating up the Atlanta restaurant scene with its “Fiery American Cooking” since opening in the fall of 2004. The one-of-kind experience available at TWO urban licks has won over the Atlanta dining scene making it one of the city’s busiest restaurants on a nightly basis. TWO has garnered an abundance of local and national accolades including Conde Nast Traveler’s “Hot List”, Bon Appetit’s “Hot 50 Tables” and one of Rachael Ray’s “favorite restaurants” in the country as told to InStyle Magazine. It has been nominated year after year as the Best Restaurant Scene and Best Place to Take an Out of Towner.