January 12, 2011 is the one-year anniversary of the earthquake in Haiti. The country remains in a dire state with over a million Haitians still living in tent cities and Cholera rapidly spreading through the country claiming thousands of victims. However, Epic International is working to bring clean water to the people of Haiti through the distribution of water filters. 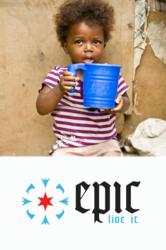 Together we can impact the lives of people in developing nations who suffer needlessly from easily preventable diseases that spread due to a
lack of clean water.

January 12, 2011 is the one-year anniversary of Haiti's earthquake. The world watched as hundreds of thousands of people fell victim to collapsing buildings and millions of Haitians took shelter in tent cities across the country. These tent cities were created as a temporary housing solution, yet over a million Haitians still call them home today.

Haiti is just coming out of its harsh rainy season, which has left many of the tent cities laden with rotting tents. This coupled with a lack of clean water and very poor sanitation continues to act as a springboard for the spread of Cholera throughout the country. To date, the MSPP has reported over 2,500 deaths and over 63,700 hospitalizations since the outbreak began in October. It has become a common practice to set-up morgues adjacent to the numerous makeshift medical clinics set-up to help treat cholera victims.

The country continues to be in desperate need of medicine, medical supplies and water sanitation to effectively fight the rapid spread of this water-borne disease. It was these dire conditions that led to the start of a new company based out of California, Epic International.

Epic International is a new watch company with philanthropy at its core in that for each Epic timepiece that is sold, Epic will provide clean drinking water for an individual in a developing country for one year through the distribution of water filters.

The founders of Epic International, Jeff and Jackie Bird, traveled to Haiti to help with the relief effort after the earthquake. At that time, it had been almost six months since the 7.0 earthquake hit, yet the relief effort was not evident in the lives of the Haitian people. Those who had survived the earthquake were now displaced and contending with a lack of clean water, food and medical aid. The couple returned home with a passion to empower everyday people like themselves to impact the lives of those in need. They immediately laid the groundwork for Epic International.

“Together we can impact the lives of people in developing nations who suffer needlessly from easily preventable diseases that spread due to a lack of clean water,” says co-founder, Jackie Bird.

Epic International’s first large filter distribution will be in late January in Jacmel, Haiti. The water filters for every timepiece that is sold up until January 20th will be allocated to the upcoming distribution. Go to http://www.epictimepieces.com to view their modern watches (only $39.95) and join the “Epic Movement” today!