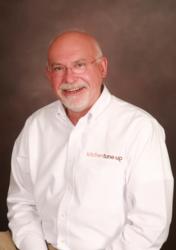 "I was struck by the honesty, sincerity, and integrity of the franchise management team.” - Frank Skubel

National home remodeling franchise, Kitchen Tune-Up, has awarded the first free franchise under their Veteran’s Program. Frank Skubel of Tallahassee, Florida is the recipient of the free franchise under the program which was launched in 2010. Kitchen Tune-Up Founder and President, David Haglund, started the program which, "offers free franchises to honorably discharged veterans throughout the nation,” explained Haglund. “This includes the franchise fee, exclusive territory, training and the start-up package for a total of $40,000 in initial fees.”

Skubel served in the United States Army from 1967-1971. Before being awarded a Kitchen Tune-Up franchise he was employed with a large telecommunications company as Vice President of Operations for the State of Florida. However, like many others, he was laid off in early 2009 and found that new employment possibilities were limited. After searching for some time, he heard about Kitchen Tune-Up’s Veterans program and contacted the Home Office in Aberdeen, SD. “I was struck by the honesty, sincerity, and integrity of the franchise management team,” explained Skubel.

Skubel has successfully had his franchise up and running since October 2010. He has found that it is very different than his previous day job explaining that the benefits realized are now personal rather than for the contribution to a corporate bottom line. “So far the business has exceeded my expectation,” said Skubel. “I have been pleasantly surprised with how well the business has been received in the Tallahassee marketplace and look forward to the future.”

Frank Skubel can be reached for free consultation at 850.765.0558, visit http://www.kitchentuneup.com to learn more.

Kitchen Tune-Up is continuing to run their Veteran’s Program into February 2011. If interested, applicants should contact Craig Green by phone at 800.333.6385 or email at craig(at)kitchentuneup(dot)com.

About Kitchen Tune-Up:
Kitchen Tune-Up specializes in kitchen and bath remodeling. They offer wood reconditioning “Tune-Ups”, cabinet refacing and redooring, closet organization, and custom cabinetry. Learn more about other franchise territories that are available nationwide and in Canada at kitchentuneup.com or ktufranchise.com.