Agoda.com Leaps into Chinese Year of the Rabbit with Great Thailand Hotel Deals 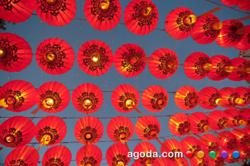 Visiting Thailand over Chinese New Year presents a great opportunity to learn how these customs are kept and how they have evolved differently in Yaowarat, downtown Phuket and Chiang Mai, where week-long events are held.

Chinese New Year is one of Thailand's most widely celebrated events, with Thais of Chinese descent making up to 14 percent of Thailand's population. While Bangkok is certainly a major hub of activity during this time, festivities surrounding the New Year extend far beyond Chinatown's Yaowarat Road.

In 2011, the Chinese New Year begins on February 3, and in many parts of Thailand, the celebrations last up to three days. The most prolific Chinese-Thai settlements can be found in Bangkok, Phuket and Chiang Mai, so it's these very locations that host the most spectacular Chinese New Year events in the country.

The most exuberant – and noisy – New Year's custom is the street parade. Characterized by the raucous beating of drums and cymbals and the lighting of fire-crackers (loud noises are believed to frighten off evil spirits), street parades also feature traditional lion dances, brightly adorned floats, acrobatics displays, elaborate lanterns and effigies of Chinese deities.

In Bangkok, Yaowarat Road is the epicenter of Chinese New Year events, with food and souvenir stalls lining the streets, larger-than-life lanterns and statues of the year's astrological sign – this year, the rabbit – placed in prominent positions. Visitors who book a hotel near Chinatown are in a great location to see street parades and sample authentic Chinese food and are also well-placed to visit the Grand Palace and Wat Pho, two of Bangkok's must-see attractions. Chinatown is conveniently close to the Hua Lamphong train terminal – Thailand's major rail hub – providing access to all of Bangkok as well as the outlying provinces.

In Phuket, Chinese New Year offers an exciting and truly unique experience for visitors. The historic Sino-Portuguese buildings of Phuket's Old Town create a stunning backdrop for kung fu shows, Chinese opera, and cultural exhibitions originating from a variety of different Chinese provinces. Both the Old Town and Patong Beach are adorned with lanterns and traditional decorations, coloring the streets red and gold.

On the other side of the Southern Thailand peninsular, Samui Island also hosts special events. Less developed than Phuket, but with a wide array of high-end restaurants and five-star facilities, plus its own international airport, Samui caters for travelers who seek a quiet island retreat with lots of great shopping, dining and night-clubbing close at hand.

In Northern Thailand, Chiang Mai is similarly abuzz with activity during this special time. Dazzling dragon processions, lion dances, acrobatic displays and martial arts feats fill the streets with movement, while talent contests and pageants take place on center stage. Travelers who book a hotel in Chiang Mai for Chinese New Year can also enjoy a wealth of historic attractions, visit nearby Karen Hill Tribe villages and tour the many beautiful temples that surround the city.

Mr. Wilfred Fan, Agoda.com's Managing Director for North Asia, comments: "Chinese Thais inherited a vibrant festive spirit from their ancestors and in many cases have adapted traditional Chinese New Year customs. Rituals are passed down through the generations and differ from the modernized format seen today in China, Hong Kong or Taiwan."

"Visiting Thailand over Chinese New Year presents a great opportunity to learn how these customs are kept and how they have evolved differently in Yaowarat, downtown Phuket and Chiang Mai, where week-long events are held.”
For travelers wishing to experience the food, festivities and fun of Chinese New Year in Thailand, Agoda.com has secured some very special hotel promotions.
Agoda.com Chinese Year of the Rabbit Hotel Promotions

In addition, Agoda customers participate in the Agoda Rewards Program, earning further discounts and free stays. Unlike programs that limit travelers to a single chain, the Agoda Rewards Program allows customers to redeem Rewards Points at thousands of hotels around the globe, at any time. A member of the Pacific Asia Travel Association (PATA), Agoda's aim is to promote travel by making it more affordable and more accessible to more people.