Teen perseveres in face of fear and doubt 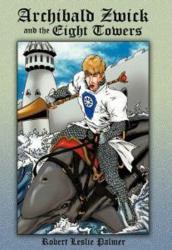 An epic battle between good and evil set in the infamous Bermuda Triangle forms the backdrop for the latest teen fantasy novel.

In his debut novel, Archibald Zwick and the Eight Towers, author Robert Leslie Palmer takes readers on a fast-paced adventure that begins when 16-year-old Archibald Zwick takes his kayak too far out into the ocean. Vacationing with his family on a remote island, Archie is soon caught in a terrible storm that drives him into an area of the Atlantic avoided by even the most seasoned mariners.

Fatigued, fearful, and losing hope, Archie comes across a mysterious, floating city where he quickly finds himself at the center of a deadly civil war. He ultimately realizes that if he wants to go home, he must take the initiative. Will he find his way home, and do the eight towers surrounding the city hide clues that might help him?

“Archie’s adventure is not merely physical,” says Palmer. “Real adventure challenges not only physically, but mentally and spiritually as well. That is what makes this novel stand out.”

Exciting and imaginative, Archibald Zwick and the Eight Towers engages the reader right from the beginning, bringing the new world to life through 13 captivating drawings.

Archie is a character with whom young readers can readily relate. Like most teenagers, Archie struggles with fear and doubt, and what he discovers about himself are secrets that teens can apply to their own similar struggles. For this reason, Archie’s final words in the novel will likely become familiar buzzwords among teens.

Before becoming a full-time writer, Robert Leslie Palmer practiced law for 27 years. He holds a Bachelor’s degree from Tulane University in New Orleans and a law degree from Georgetown University in Washington, D.C. Palmer attended college on an Army Reserve Officer Training Corps scholarship and was designated a Distinguished Military Graduate. He served as a JAG officer for four years.

Palmer is the founder and current president of the non-profit Alabama Legal Reform Foundation and is the current chairman of the Christian-based non-profit Downtown Jimmie Hale Mission, Inc. He is a member of the Alabama State Poetry Society and the Christian Legal Society. He resides with his family in Birmingham, Ala.