The latest sales numbers from the RTA Store show that the online retailer finished 2010 strong with record profits. In 2011 managers are bracing for higher expected demand for pre-assembled and ready-to-assemble kitchen cabinets. 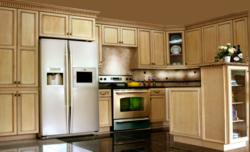 I think all the staff were wonderful and very prompt in response to everything. They rendered drawings of what my kitchen could look like for the designs and even input several options I didn't think of like extra storage, which is a plus in any kitchen!

Tyler Ackerman, company president at The RTA Store, says, “We are creating new customer service positions during a time when unemployment is high and so many other companies still aren’t hiring additional staff. A larger customer service department means we can provide even better service than we already do for customers who are looking for high quality kitchen cabinets.”

In 2010 The RTA Store became the largest internet retailer for RTA kitchen cabinets in America, and the company’s sales numbers continue to show its strength during this poor economic time. The RTA Store credits its customers and staff members with the record profits and is looking for even more opportunities in 2011 to serve those who need ready-to-assemble and pre-assembled kitchen cabinets.