The tiger reserves of Asia could support more than 10,000 wild tigers – three times the current number – if they are managed as large-scale landscapes that allow for connectivity between core breeding sites, a new paper from some of the world’s leading conservation scientists finds. 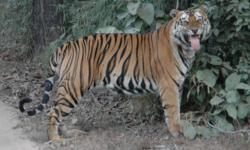 “In the midst of a crisis, it’s tempting to circle the wagons and only protect a limited number of core protected areas, but we can and should do better.”

The tiger reserves of Asia could support more than 10,000 wild tigers – three times the current number – if they are managed as large-scale landscapes that allow for connectivity between core breeding sites, a new paper from some of the world’s leading conservation scientists finds. The paper is the first assessment of the political commitment made by all 13 tiger range countries at November’s historic tiger summit to double the tiger population across Asia by 2022.

“A Landscape-Based Conservation Strategy to Double the Wild Tiger Population” in the current issue of Conservation Letters finds that the commitment to double tiger numbers is not only possible, but can be exceeded. However, it will take a global effort to ensure that core breeding reserves are maintained and connected via habitat corridors.

“In the midst of a crisis, it’s tempting to circle the wagons and only protect a limited number of core protected areas, but we can and should do better,” said World Wildlife Fund(WWF) Chief Scientist Dr. Eric Dinerstein, a co-author of the study. “We absolutely need to stop the bleeding -- the poaching of tigers and their prey in core breeding areas -- but we need to go much further and secure larger tiger landscapes before it is too late.”

Wild tiger numbers have declined from about 100,000 in the early 1900s to as few as 3,200 today due to poaching of tigers and their prey, habitat destruction and human/tiger conflict. Most of the remaining tigers are scattered in small, isolated pockets across their range in 13 Asian countries.

“Tiger conservation is the face of biodiversity conservation and competent sustainable land-use management at the landscape level,” said study co-author Dr. John Seidensticker of the Smithsonian Conservation Biology Institute. “By saving the tiger we save all the plants and animals that live under the tiger’s umbrella.”

The authors found that the 20 priority tiger conservation landscapes with the highest probability of long-term tiger survival could support more than 10,500 tigers, including about 3,400 breeding females. They also looked at historical examples to prove that a doubling or tripling is possible using large landscapes:

In contrast, the authors point to two of India’s premier tiger reserves to show how lack of connectivity can preclude tiger population recovery. Tigers disappeared from Sariska and Panna tiger reserves in 2005 and 2009 due to poaching and were not able to re-colonize because these reserves are not connected to other reserves through habitat corridors. Consequently, wild tigers had to be translocated into these reserves to attempt to re-establish populations.

Besides poaching and habitat loss, the $7.5 trillion in infrastructure projects like roads, dams and mines that will be invested in Asia over the next decade threatens tiger landscapes. A focus only on core sites and protected areas like reserves, instead of larger landscapes, could be seen by developers and politicians as a green light to move forward with harmful infrastructure projects outside of core sites.

The authors insist that conservationists and governments must be involved in helping design infrastructure projects to mitigate their impacts on tigers both inside core sites and in current and potential forest corridors. A recently built oil depot in India’s Terai Arc, for example, severed a vital elephant and tiger corridor. Conservationists are now in litigation to remove the depot. Early intervention could have avoided this.

"Following the St. Petersburg Declaration, Nepal has committed to the goal of doubling wild tiger numbers across our country by 2022,” said Deepak Bohara, Nepal’s Minister for Forests and Soil Conservation. “This analysis shows that it can be done, not just in Nepal, but, if done right with careful study and planning, across the entire tiger range. It is also worth noting that tiger conservation provides carbon credits, protects water resources, and complements community development efforts. Thus, it is important to promote regional cooperation to maintain a healthy tiger corridor between different reserves.”