As Clarke, New England's exclusive Sub-Zero and Wolf distributor and the Ultimate Kitchen Resource Center for homeowners, flips the switch to power their entire Massachusetts complex with solar energy, Chef Ming Tsai will cook with solar power in his Television Studio Kitchen on October 6th at Clarke's Milford Showroom. 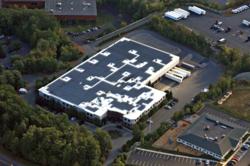 Clarke's rooftop solar project is one of the top five in Massachusetts history.

“This is a great way to celebrate our 20th anniversary in business,” said Tom Clarke, CEO of the award-winning appliance distribution company. “We have always looked toward the future and made every decision based on business excellence, customer service and innovation. There’s no better way to encourage homeowners to explore solar power than install it to power 15 kitchens at once in our showroom. Every Sub-Zero and Wolf is now solar powered at Clarke.”

The Clarke complex includes The Clarke Culinary Center, where local and national chefs share their cooking secrets with homeowners in weekly classes. On Thursday, October 6, Emmy-nominated Chef Ming Tsai will cook for an audience in an event in his television studio kitchen at Clarke, creating the meal entirely with solar power.

“We believe this project is a great example of a privately owned family business in Massachusetts doing what is good for the environment, the community and the country,” said Sean Clarke. “ We are very proud of conceiving of and executing a project that invests in the future, puts people to work in our home state and reduces our dependence on fossil fuel energy, which is key at this point in history.”

The Clarke solar project ranks in the top five rooftop installations (in terms of kilowatts) in Massachusetts and was collaboration between Clarke and Massachusetts solar installation company Beaumont Solar of New Bedford.

“We chose Beaumont Solar Company of New Bedford, MA as our installation partner on the project,” continued Sean Clarke. “From the first time we met with Beaumont President and CEO Phillip Cavallo, we knew his company had the same philosophy that we did. They are one of the top three solar installers in the Commonwealth and performed the entire installation process using their own internal company employees. Together we hope to inspire other businesses and homeowners to adopt alternative energy sources.”

According to Parker, Clarke will generate 94% of its electrical energy through solar power generated by the solar panels. In addition, Clarke has taken serious steps to reduce its energy consumption by 6% through internal efficiencies. The combination of these activities has resulted in Net Zero electrical energy consumption and a savings of more than $77,000 each year.

The Clarke project will avoid the emissions equivalent to 35,052 gallons of gas per year or the electricity used by 37.9 average American homes.

The Clarke solar installation launched at the end of April, with conversion of the building’s original ballasted roof to a “cool roof” surface, which required removal of all embedded stones and installation of a more energy efficient white roof surface to reflect the sunlight onto the entire cylindrical surface of the solar panels, making the roof part of the specified energy property.

“We’re very excited about this project,” said Sean Clarke. “We look forward to the many benefits that solar power affords us. We invite homeowners and business owners to make an appointment to tour the complex and learn about the project.”

Clarke
This award-winning distributor of appliances from Sub-Zero, Wolf and several other high-performance brands, operates expansive kitchen showroom resource centers in Milford, MA and South Norwalk, CT, where homeowners can learn about and experience these appliances in dramatic kitchen vignettes, without any pressure to purchase. Clarke distributes these brands through an exclusive network of retail appliance dealers throughout New England. Clarke also offers Clarke Customer Care, a dedicated repair service for their brands, that has earned them “Best in the US” satisfaction survey results. The company also runs The Clarke Culinary Center inside their showrooms to offer cooking classes taught by New England’s finest chefs. For more information, visit http://www.clarkecorp.com.

Clarke began solar panel installation with transporting the materials to the rooftop at the beginning of the Summer of 2011.

High atop the trees of Milford, MA, Clarke's rooftop solar project makes this Sub-Zero and Wolf distributor 100% solar-powered in 2011.

Chef Ming Tsai, who tapes his national television series at Clarke, will prepare his first solar-powered meal at Clarke on October 6, 2011.