Chopper Design Services has announced today that it has adapted the LegUp LandinGear Motorcycle Stabilization System to the Honda Shadow Model Lineup. The LegUp system is a computer controlled stabilizing device, aimed at riders who need help balancing their motorcycles at slow speed. Originally designed for Harley-Davidson Touring bikes, the company continues to add models from other manufacturers to its offerings. The Honda Shadow Models have just been released, and are available immediately. 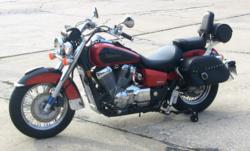 Chopper Design to continually adding new models to its lineup

LegUp LandinGear, a division of Chopper Design Services, has announced the LegUp LandinGear Motorcycle Stabilization System has been adapted to Honda Shadow Cruiser bikes. The computerized LandinGear system helps riders balance their motorcycles when stopping, pulling away from a stop or maneuvering slowly.

Sometimes called 'The Perfect Trike Alternative', the LegUp system been available for Harley-Davidson Touring Bikes, Honda Goldwings and other bike models since early 2009. The high demand for this innovative device since then has caused Chopper Design to continually add new models to its lineup. This computerized system deploys a small set of wheels as the motorcycle slows, and retracts the same upon acceleration. These small retractable wheels help support the vehicle at slow speeds.

LegUp LandinGear constantly receives requests by owners of various models desiring help with their bikes. The Honda Shadow models have had the highest demand recently, the company says, and started the engineering process in early June. LegUp is proud to report the adaptation is now complete, and availability is immediate. Pricing is the same as similar models.