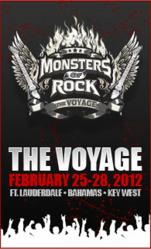 This is one of the greatest heavy metal lineups in history, land or sea.

The cruise is based on a legendary rock festival at Castle Donington, Leicestershire, England…Seven metal bands and thousands of rabid fans converged on the soggy turf of Donington Park and became part of rock history as a historic event was born…the Monsters of Rock! Fast forward to today…the tradition of the Monsters of Rock is reborn, this time in the Bahamas aboard a luxury cruise ship, showcasing the greatest floating 80s heavy metal festival in history!

For one all-inclusive price, fans will enjoy a myriad of special heavy metal concerts, events and activities, designed to please the most discerning rock & roll metal-head. While the music is the centerpiece, this is more than a “Concert Cruise” event…it is fantasy camp designed for interaction between artists and fans. The fun will begin the moment fans begin to board the beautiful MSC Poesia, meeting new friends poolside during the kickoff Sailaway Concert.

In addition, fans will experience inviting music venues & events, featuring artists performing all day and night on the Main Stage plus the Monster’s Coffee Shop, Back-Alley Stage and the Pool Deck Showcase for partying under the stars. Fans are also encouraged to bring along their own guitar to participate in the Monster’s Amateur Jam to play out their personal heavy metal fantasy.

This will set the tone for the next three days, as other over-the-top special events, including the Monsters Rock & Roll Prom 1989, “So You Think You Can Shred” Amateur Guitar God Competition (judged by guitar legends including Brad Gillis and George Lynch), Shotgun Wedding Vow Renewal, Artist Meet & Greets, Book Signings and more provide a wide array of entertainment options. As an added bonus, TV personality Eddie Trunk from VH1’s That Metal Show will moderate up close and personal Q & As with featured artists in Rock N’ Roll War Stories.

The Monsters of Rock Cruise is a playground for the serious heavy metal fan where music and a luxury cruise hook up for the vacation of a lifetime. Fall discount rates for the cruise are available now, starting at $849 per person (double occupancy). Tickets for the Monsters of Rock Cruise will be sold on a first-come, first-served basis and will only be available at http://www.MonstersOfRockCruise.com.