Milken Archive of Jewish Music Introduces: Sephardi and Near Eastern Inspiration in the Music of American Jewry (Volume 2: A Garden Eastward)

Think of them as the first world musicians. Music did not always travel as easily as it does today. Yet hundreds of years before the Internet made sharing music as easy as sending an e-mail, Sephardi Jews – those who originated on the Iberian Peninsula and subsequently dispersed across the globe, from North Africa and the Mediterranean to Europe, North America, and the Caribbean – were trading music with everyone they met. The Milken Archive of Jewish Music: The American Experience presents the homegrown fruits of that remarkable legacy on Volume 2, "A Garden Eastward: Sephardi and Near Eastern Inspiration in the Music of American Jewry." 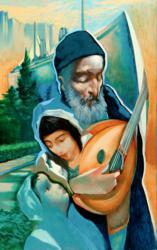 Cover art for Volume 02: A Garden Eastward by Ralph Gilbert.

And the Sephardi Jews who were expelled from modern-day Spain and Portugal at the height of the Spanish Inquisition continued to absorb and influence the many musical traditions they encountered throughout their vast diaspora, from Amsterdam and London to the far reaches of the old Ottoman Empire and beyond.

Yet for many years, the rich tradition of Sephardi music – an incredibly diverse, global phenomenon that predated what we now call "world music" by more than half a millennium – remained largely unknown outside of the Sephardi community itself. This was true even in America, where Sephardi immigrants first arrived in New Amsterdam by way of Recife, Brazil, in 1654. (The music of those earliest American Jews is featured on Volume 1, "Jewish Voices in the New World: The Song of Prayer in Colonial and 19th-Century America.")

From the 1950s onwards, however, American composers began plumbing the depths of the Sephardi tradition for inspiration, looking not only to Sephardi melodies but also to the rich vein of Sephardi poetry that was created during the Golden Age of Spanish Jewry. That prolonged period of tolerant Islamic rule led to an efflorescence of Jewish culture which lasted from the 8th to the 15th centuries, ending only when Catholic forces completed their reconquest of the region and expelled those Jews who refused to convert. Marvin David Levy's Canto de los Marranos opens with a reading of the expulsion decree of 1492, which forced both Jews and crypto-Jews (or marranos, Jews who had publicly converted but continued to practice Judaism in private) to choose between exile and death. (Go online to watch video footage from the recording session in Barcelona, Spain, along with an oral history interview with the composer.)

Bruce Craig Roter and Hugo Weisgall, for example, evoke the imagery of medieval Spanish-Hebrew poetry in their own fiercely original idioms – Roter using rhythmic jolts and bracing dissonance to summon Yehuda al-Harizi's "The Lightning" (Three Short Songs), and Weisgall conjuring the violence and pathos of Yehuda Halevi's Love's Wounded through orchestral settings that are by turns gentle and jarring. Bruce Adolphe takes a series of folk song texts in Ladino, the unique language of Sephardi Jewry, and casts them in a style that blends modernism with hints of flamenco guitar. (You can see the composer himself discuss the genesis of Ladino Songs of Love and Suffering in an online oral history video.) And Richard Neumann transforms the prayer recited over a cup of wine before the Sabbath evening meal (Sephardi Kiddush) into a remarkable dialogue between cantor and flutist.

Some of the works contained in this volume, like Samuel Adler's Five Sephardic Choruses and Robert Starer's virtuoso Fantasy on a Sephardi Melody, for solo organ, reach beyond Sephardi music to the sounds of Mizrachi Jewry, whose roots lie in the Near and Middle East (Yemen, Iraq, Iran). But as one would expect from the Archive, all are uniquely American.

Consider, for example, Lecha dodi and Arvit Morocco, by Hazzan Aaron Bensoussan. Thoroughly trained in the intricacies of European cantillation in the United States, Bensoussan here re-creates the soaring North African cantillation style that he learned growing up in Morocco. Don't be surprised if his ornate vocal flights bring to mind Koranic chant or classical Arabic music; Sephardi liturgical music draws on both. (Go online to watch video of Bensoussan performing selections from the work with the Schola Hebraica and the New London Children's Choir.)

Or turn your attention to the exquisite a cappella harmonies of the all-male choir, Schola Hebraeica, featured in the American Choral Settings in the Western Sephardi Liturgical Tradition— selections from the unique repertoire developed at New York's Congregation Shearith Israel (a.k.a. The Spanish and Portuguese Synagogue), America's first and oldest Jewish congregation. Or the diaphanous choral textures of Mario Castelnuovo-Tedesco's Sacred Service for the Sabbath Eve, the first such service to premiere in the New York Park Avenue Synagogue's commissioning program, source of so much modern Jewish-American music. Castelnuovo-Tedesco may have drawn on his Italian Sephardi heritage in writing this work, but its cinematic sweep surely owes something to his career as a celebrated Hollywood composer.

Volume 2: A Garden Eastward is the seventh of 20 volumes that will be added to the Milken Archive of Jewish Music’s virtual museum site over the next year-and-a-half. Founded by philanthropist Lowell Milken in 1990, the Milken Archive’s vast repertoire reflects the scope and variety of Jewish life in America, revealing the universality of the Jewish experience to people of all faiths and backgrounds. The Archive’s virtual museum website is an interactive guide to music, videos, oral histories, photos and essays chronicling over 350 years of Jewish music and culture in a land of freedom.