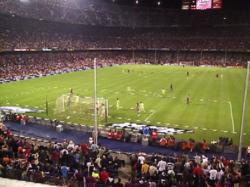 FC Barcelona at the Nou Camp

Arsenal fans feeling the loss of Cesc Fabregas from their team have even more options to get to see him playing for his new club thanks to Monarch Airlines starting daily flights to the Catalan capital from London Gatwick.

David Leigh of Simply Barcelona Tickets says, "Cesc has fitted into the Barça squad extremely quickly but that's hardly a surprise as he was in the team's Youth Academy alongside Lionel Messi and Gerard Pique. He was also part of Spain's World Cup winning squad alongside a team that was largely made up of Barcelona players so he knows their style of play extremely well. While Arsenal fans might be missing him, the fans in his new club are going crazy over him and it's so cheap and easy to get to Barcelona these days that it's crazy to miss out on seeing FC Barcelona at their very best."

The 2011-2012 season has started out to be just as exciting as expected, with arch-rival Real Madrid desperate to grab at least one title for themselves. However, the new Barça squad looks every bit as good as last year when they won the Spanish League and Champions League titles and so Jose Mourinho's team has a big job ahead of them.

It can be difficult to get hold of good tickets for Barcelona's matches, but football fans travelling to Barcelona can avoid disappointment by ordering FC Barcelona tickets online.

David Leigh is the owner of Simply Barcelona Tickets, a leading provider of tickets for FC Barcelona. For more information, visit http://www.simplybarcelonatickets.com.