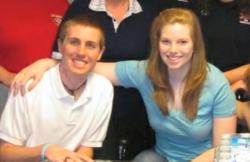 Joe and Cecilia Detilwer, a year after the car accident that nearly took both their lives.

Children aren't just little adults. If a child is critically injured, he needs a Level One Pediatric Trauma Center where the critical care team is specially-trained to operate on and care for children.

Joe and Cecilia Detwiler had last rites read to them on the day of that crash – a crash that nearly amputated 15-year-old Cecilia’s legs and caused catastrophic injury to 17-year-old Joe’s brain. “These injuries – you just don’t recover from the kind of injuries they had,” says their mom, Mary Detwiler.

The sequence of events that began that early July day in St. James, Missouri – months of brain scans, breathing tubes, physical therapy –ultimately lead to miraculous recoveries and the release of both siblings from St. Louis Children’s Hospital.

It wouldn’t have happened that way had it not been for one decision that set everything in motion – a decision that took place at the scene of the accident.

“Joe and Cecilia are an example of everything going right,” says Diana Kraus, Manager, Trauma Services for St. Louis Children’s Hospital. “Had paramedics not had the presence of mind to transport them directly to a Level 1 pediatric trauma center, they probably wouldn’t be here, and certainly wouldn’t be in such great shape.”

St. Louis Children’s Hospital was not the closest hospital to the scene of the accident. But it was the closest pediatric Level one trauma center, a distinction emergency crews in the field understood could mean the difference between life and death.

Already a Level One Pediatric Trauma Center in the state of Missouri, St. Louis Children’s Hospital recently received the Level 1 designation from the state of Illinois. Level One trauma centers provide care to the most critically injured patients, and offer the highest level of care. “More importantly,” says Dr. Martin Keller, director of the trauma program at St. Louis Children’s Hospital, “we are a Pediatric Level One Trauma Center. Children aren’t just little adults. If a child is critically injured, he needs a Level 1 pediatric center where the critical care team is specially-trained to operate on and care for children.”

In order to receive the Level One trauma designation, a hospital must provide the most advanced critical care, like pediatric neurosurgery or re-vascularization expertise (reattaching severed limbs) , treat a high volume of complex cases, and produce successful outcomes, among other criteria.

St. Louis Children’s Hospital has the largest team of pediatric surgeons (general, neuro, orthopedic, and plastic) in the region. In fact, Children’s is one of four hospitals in the country with four or more pediatric neurosurgeons.

The only pediatric trauma center in the region that will re-attach and “re-vascularize” severed limbs, the trauma team at St. Louis Children’s Hospital has managed some of the most complex and critical trauma cases in the region.

“As a parent of a child with urgent medical needs, I’d want to know what kind of experience the medical team has had with my child’s injury, what kind of special care my child will receive, and what the success rate that medical team has for that kind of injury,” says Kraus. “Unfortunately, most parents won’t think to ask such questions at the scene of a serious accident.” The Level One Pediatric Trauma designation answers those questions preemptively so the EMS crew doesn’t have to spend precious time determining where to take the child, and the parents don’t have to worry.

St. Louis Children's Hospital has provided specialized care for children for more than 130 years. Both US News & World Report and Parents magazine rank St. Louis Children’s among the Top 10 pediatric hospitals in the nation. In 2010 the hospital received the Magnet re-designation from the American Nurses Credentialing Center, the nation’s highest honor for nursing excellence. St. Louis Children’s Hospital is affiliated with Washington University School of Medicine, one of the leading medical research, teaching and patient care institutions in the nation. The hospital is a member of BJC HealthCare. For more information, visit http://www.StLouisChildrens.org, or visit us @STLChildrens on Facebook and Twitter.