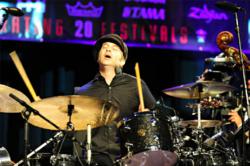 Two of rock and roll’s most respected musicians have agreed to join an All Star Band that will provide the evening’s entertainment at Joseph, Greenwald & Laake’s (http://www.jgllaw.com) “Law of Rock and Roll” Benefit to be held on March 23, 2012 at the Marriott North Bethesda in suburban Maryland.

Rivera has played with Billy Joel and his band since 1982. In addition, he has worked with Foreigner, Hall and Oates, Peter Gabriel, John Lennon, Billy Ocean and is the Musical Director for a Beatle--Ringo Starr! Just last year, Rivera joined Joel and Bruce Springsteen to rock the stage at the Rock and Roll Hall of Fame Concert at Madison Square Garden.

Shawn Pelton is a New York based session and studio drummer and has been the drummer for Saturday Night Live’s house band for over a decade. His credits include work with Bruce Springsteen, Sting, Sheryl Crow, John Mellencamp, The Backstreet Boys, Shawn Colvin, Celine Dion and many others.

The benefit will raise funds for “A Wider Circle” (http://www.awidercircle.org), a Washington DC based charity that provides goods and services to thousands of impoverished families in the metropolitan area.

“Jeff is putting together an amazing group for us. I don’t expect too many people will be sitting down, that’s for sure”, says David Bulitt, JGL’s Assistant Managing Director and Chair of the event. Ticket sales have been brisk and Bulitt expects a sellout: “My guess is that we will be sold out by the end of the year. Several local businesses have signed on to sponsor. People are really excited about putting such a great event together for such a worthy cause”.

This is not the first time that Joseph, Greenwald and Laake, PA has put its energy and resources behind a local charity. In 2008, the law firm hosted a 40th Anniversary Rock and Roll Benefit in Greenbelt, Maryland and raised more than $30,000.00 for the Housing Initiative Partnership.

Learn more about JGL at http://www.jgllaw.com.