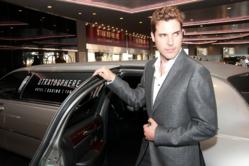 Frankie is a rising star and everyone who sees him is blown away by his talent.

Born in Santa Cruz, California, Moreno’s career trajectory started upward at the age of 11 when the classically trained pianist landed a spot next to Ed McMahon on “Star Search”. That upward path has continued for the singer/musician. Moreno is currently working on his own album with Sony Masterworks, an opportunity that arose after Moreno collaborated on the “Eleanor Rigby” track with world-renowned violinist Joshua Bell on his best selling debut album, At Home With Friends, that reached #1 on the Billboard Charts in two categories.

“It’s always been a dream of mine to headline a Las Vegas showroom and I can’t wait for opening night,” said Moreno. “Our show is a bit of a throwback to the kinds of performances that made Vegas showrooms famous, but we keep a modern vibe.”

Moreno is a favorite among music-lovers, as well as fellow entertainers and celebrities who are often spotted at his performances in Las Vegas and abroad. His unique style and sophisticated swagger have garnered the music industry’s attention, whether on tour with Billy Currington who was co-headlining with Sugarland, or joining multi-platinum artists Air Supply on their world tour.

“Frankie is a rising star and everyone who sees him is blown away by his talent,” said Paul Hobson, Stratosphere Casino Hotel & Tower General Manager. “With all the great changes and renovations we’ve made, this is the next step for us in elevating our guests’ experience.”

Moreno and his band will perform three nights a week in the Stratosphere Theater. His Wednesday night show will begin at 11pm, while his show on Friday and Saturday nights will begin at 8pm. Tickets are $29.99, plus tax. Las Vegas locals and Stratosphere hotel guests can see the show for only $19.99, plus tax. For ticket information, please call 800-99-TOWER (800-998-6937). The show is for adults 21 and older.

BITE Las Vegas will move to 9pm on Sunday, Monday, Wednesday and Thursday, and 10pm on Friday and Saturday (dark Tuesday).