More than 75 metric tons of food will be distributed by Salesian Missions and its Swaziland-based partner, Manzini Youth Care, through a grant recently awarded by the United States Agency for International Development (USAID) Office of Food for Peace as part of its 2011 International Food Relief Partnership Program. Food aid will reach more than 23,000 marginalized youth and adults in Manzini and its surrounding urban areas, including approximately 21,500 children in scholarship schools. 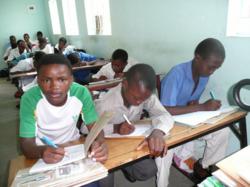 Feeding programs are one way to encourage children to attend school, because for many of the children, it will be their only meal of the day.

More than 75 metric tons of food will be distributed by Salesian Missions and its Swaziland-based partner, Manzini Youth Care, through a grant recently awarded by the United States Agency for International Development (USAID) Office of Food for Peace as part of its 2011 International Food Relief Partnership Program.

According to the World Food Program, more than 400,000 of a total population of one million Swazis are now dependent on some form of food aid – double the number in 2006. World Food Program statistics also reveal about 63 percent of Swaziland’s 1 million people live below the poverty line, subsisting on $0.60 (US) a day.

“Both severe poverty and high rates of HIV/AIDS makes it critical to support food programs in Swaziland. Even when HIV treatment is available, effective treatment requires that the medication be taken with food. If there is no food, the treatment is ineffective,” says Father Mark Hyde, executive director of Salesian Missions, the U.S. arm of the Salesians of Don Bosco headquartered in New Rochelle, NY.

USAID reports that with an estimated adult prevalence of 26.3 percent, Swaziland has the world’s most severe HIV/AIDS epidemic, posing a serious challenge to the country’s economic development.

“Many families are breaking up because of economic or health situations, and as a result, children are taking on the responsibilities of adults,” says Fr. Hyde. “Feeding programs are one way to encourage children to attend school, because for many of the children, it will be their only meal of the day.”

World Food Program statistics show that there are more than 80,000 orphans in the country and that children head 15 percent of total Swazi households.

Manzini Youth Care’s free primary school targets young people over the age of 10, who have not previously attended primary school or have dropped out due to poverty. Home visits ensure that the families genuinely could not afford mainstream schooling.

“With poverty increasing, demand for the school is rising. Currently, there is no feeding program at the school, and teachers report that students are frequently hungry and unable to concentrate by mid-morning,” says Fr. Mark. He adds that not surprisingly, the schools closest to the areas where scholarship students live are generally the poorest in resources, yet highest in number of single or double orphans. Goals of the feeding program include increasing enrollment and attendance rates, improving grade point averages and increasing body weight of the students.

According to the "Swaziland Annual Vulnerability Assessment & Analysis Report 2009" published by the Swazi Vulnerable Assessment Committee, Manzini and its surrounding urban areas are one of the worst affected zones in terms of food insecurity. A survey of the communities conducted by Manzini Youth Care shows that the average household consists of 6.7 people and that 28% of the households have no means to buy food and very little means of cultivating their own food.

“Many people move from rural areas hoping to find a job, but end up unemployed. They have to search for something to eat every day, because there isn’t space or opportunity for a garden,” says Fr. Hyde.

Rural areas in Swaziland already feature a fairly high number of non-governmental organizations that are providing food aid to vulnerable communities. Manzini does not as it is often assumed that food insecurity isn’t as big of a problem in the city, explains Fr. Hyde.

The Salesian community in Manzini established Manzini Youth Care as a non-governmental organization in the 1970s. It provides services to marginalized youth, including free primary school for children who have dropped out of school due to poverty, two vocational training centers for older youth, residential care to former street children and a drop-in school for street children when they first leave the streets. Manzini Youth Care also works in the communities surrounding Manzini to help local people improve living standards, sanitation and food security. During the past five years, it has coordinated the work of international volunteers and local community members to build two residential homes, which provide the daily feeding program.

To make a donation, the public can go to SalesianMissions.org and click on "Donate Now."

For more articles like this one, go to MissionNewswire.org..