The athlete and self-taught musician launches music single along with the “Show Your Dedication” Video Contest to give others a chance to win a free trip to Super Bowl XLVI plus $5,000 to pursue their passion 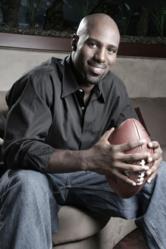 'Dedicated' is more than an expression of my own passion—more than a single people can jam to—but also a vehicle for bringing people closer to living out their own passions and fulfilling their dreams.

When the NFL lockout paused Buffalo Bills Safety Bryan Scott’s passion for football, he dedicated the extra time toward his other great love—music. Scott collaborated with his music producer brother Brandon Scott to record a debut single, Dedicated—a hit that showcases his vocal, instrumental and songwriting capabilities.

For the Dedicated music video, Scott engaged some of his NFL friends and competitors who also share a love for music—including Atlanta Falcons Fullback and Pro Bowler Ovie Mughelli, Buffalo Bills Linebacker Arthur Moats, Atlanta Falcons Linebacker Stephen Nicholas, and Jacksonville Jaguars Pro Bowl Running Back Montell Owens. The inspirational pop song encourages people to “aim for the moon” and stay dedicated to their passions. The project came naturally for Scott, whose passion for music dates back to age eight when he taught himself to play piano, drums and saxophone.

As part of the Dedicated single launch, Scott is also launching the “Show Your Dedication” Video Contest—encouraging people to produce and submit their own advertisement or promotional video that showcases their personal passion and their dedication. The contest winner will receive a Big Game Prize Package, including two tickets and an all-expense paid trip for two to Super Bowl 2012 in Indianapolis. The winner will also receive up to $5,000 to directly support the continued pursuit of their passion and a feature in the compilation music video for the single Dedicated.

“I am blessed to have passions that keep me focused and motivated even during challenging times; but I know too many people never get a chance to live in their own passion” said Bryan Scott, Buffalo Bills Safety and musician. “I wanted to make Dedicated more than an expression of my own passion—more than a single people can jam to—but also a vehicle for bringing people closer to living out their own passions and fulfilling their dreams.”

ABOUT THE "SHOW YOUR DEDICATION" CONTEST
The "Show Your Dedication" Video Contest is an open call for people to create their own video that showcases their personal passion—for music, sports, theater, fashion, cooking, family, a career, community service, or any other hobby or interest that is the subject of their dedication.

3. Promote your video during General Submission voting. All video submissions will be screened and, upon approval, posted on ShowYourDedication.com for the general public to view and vote for their favorites. Invite your friends and family to view and vote for your video during this time. The general public will have unlimited votes during this General Submission voting period before December 5, 2011. The TeamBScott review panel will select ten finalists based on the video’s creativity, dedication to the passion and total number of votes. Ten finalists will be announced and posted on ShowYourDedication.com on December 20, 2011.

4. Promote your video during Finalist voting. The final winner will be selected out of ten finalists based solely on votes. So, if you make the final 10, you will need to promote, promote, promote. Ten votes will be allotted per person during this Finalist voting period. Encourage as many of your friends and family, as well as their friends and family, to view and vote for your video.

Video submissions for the contest will be accepted on October 27, and voting for videos will begin November 4. The finalist who receives the most votes by January 3, 2012 will be selected as the Show Your Dedication Video Contest Grand Prize winner. The winner will receive a Big Game Prize Package, including two tickets to the Super Bowl 2012 in Indianapolis, plus round-trip airfare and hotel accommodations. The winner will also receive a donation up to $5,000 to directly support the pursuit of his/her passion and a feature in the compilation music video for the single Dedicated.

“I’ve seen firsthand just how much Bryan has inspired others through his enthusiastic pursuit of his passions, and we’re hoping the Dedicated single and the Show Your Dedication contest will do the same,” said Brandon Scott, executive producer, Dedicated. “We are hoping to get all kinds of videos representing a wide variety of passions—from the arts to community service.”

To hear the Dedicated music single and learn more about the Show Your Dedication Video Contest, visit http://www.showyourdedication.com.

ABOUT BRYAN SCOTT
A nine-year veteran in the NFL and Safety with the Buffalo Bills, Bryan Scott was the first pick of the Atlanta Falcons in the second round of the 2003 NFL Draft (55th overall). After three seasons in Atlanta and one season with the New Orleans Saints, Scott signed with the Bills in 2007 and has had an impressive and consistent career. Scott grew up in Warrington, Pennsylvania and showed early excellence in sports. Scott is a self-taught musician and plays the piano, drums, saxophone and guitar. Scott’s passion for music led him to create the Bryan Scott “Pick Your Passion” Foundation for the Arts, which encourages participation in music, visual and performing arts. Coinciding with that interest, Scott is an active member of the NFL Gospel Choir and participated in the 2003 “Monday Night at the Mic” with Grammy Award winning artist, Michelle Branch. Recently, Scott has also become an avid cyclist and has participated in several bike tours around Atlanta.