The new novel, WIRED, has won rave reviews on its way to becoming the bestselling thriller on Amazon. This book is now rocketing up the charts at Barnes & Noble, and is available to Nook users for a limited time for just 79 cents. 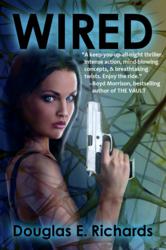 WIRED is fast paced, with a twisty plot, big ideas, and nonstop action and intrigue.

The breathtaking new novel, WIRED, has won rave reviews on its way to becoming the number one bestselling thriller on Amazon. This book is now racing up the charts at Barnes & Noble as well. For a limited time, Nook users can download WIRED at B&N for only 79 cents.

WIRED's author, Douglas E. Richards, is a former genetic engineer and biotechnology executive who has written for National Geographic, the BBC, and many others, and who has also penned a series of widely acclaimed YA thrillers.

"WIRED is fast paced, with a twisty plot, big ideas, and nonstop action and intrigue," says Ernest Lilley, founder of SFRevu and Senior Editor of TechRevu. "It'll have you guessing right up to the very end."

In WIRED, Kira Miller is a brilliant genetic engineer who discovers how to temporarily achieve savant-like capabilities in all areas of thought and creativity. But what if this transcendent level of intelligence brings with it a ruthless megalomania?

Former special-forces operative David Desh is reactivated for one last mission: to find Kira Miller, the enigmatic genius behind a bioterror plot that threatens millions. But when Desh learns that the bioterror plot is just the tip of the iceberg, he is thrust into a byzantine maze of deception and intrigue, and he becomes a key player in a deadly game he can't begin to understand. A game that is certain to have a dramatic impact on the future course of human history.

"WIRED is a brilliant concept," adds bestselling author Boyd Morrison. "If you're looking for a slam-bang, keep-you-up-all-night thriller, crack open WIRED and enjoy the ride."

To learn more, visit the author's website or friend him on Facebook at Douglas E. Richards Author