Ramos Kelly, MD, Becomes a Fellow of the Prestigious American College of Surgeons

Ramos-Kelly, MD, FACS, a world-renowned bariatric surgeon, is initiated into the American College of Surgeons. 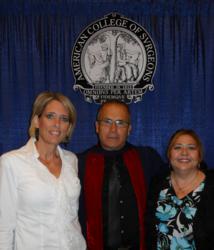 Dr. Ramos Kelly was evaluated by his peers on strict membership guidelines in education, training, professional qualifications, surgical competence, ethics and devotion to his bariatric patients.

Dr. Ramos Kelly is dedicated to bariatric surgery without compromise, practicing with the highest ethics of professional practice. Jaime Ricardo Ramos Kelly, MD, FACS, was born in West Branch, Michigan and served in the U.S. Military. Dr. Ramos Kelly graduated from the Universidad Autonoma de Guadalagajara’s Medical School in 1993. Prior to his current career in Bariatrics, Dr. Ramos-Kelly performed transplant and trama surgeries. This addition to Dr. Ramos-Kelly’s curriculum vitae will further add to his credibility and his surgical acumen in bariatrics.

The convocation took place on October 23, 2011 at the College’s 97th Annual Clinical Congress in San Francisco. Dr. Ramos-Kelly was accompanied by his family and patient coordinators from aLighterMe.com. Currently, there are only 4,000 F.A.C.S. who are located in the United States and Canada, adding significant importance Dr. Ramos Kelly’s achievement.

The American College of Surgeons is one of the most prestigious medical associations in the world, with 77,000 members including more than 4,000 Fellows in countries other than the United States and Canada. Established in 1913, the American College of Surgeons' mission is to improve the care and experience of the surgical patient, and to safeguard the standards of care within an optimal and ethical practice.

Dr. Ramos Kelly is a weight loss surgeon based in Tijuana, Mexico, with memberships in the American Society for Bariatric Surgery and the Society of American Gastrointestinal and Endoscopic Surgeons. Dr. Kelly is one of the most skilled weight loss surgeons in Mexico, having performed well over 7,000 bariatric surgeries. Dr. Ramos Kelly is well versed in vertical sleeve gastrectomy, roux-en-y gastric bypass, gastric banding, sleeve plication and revision surgeries. He can be reached through his patient coordinator, MexicoBariatricCenter.