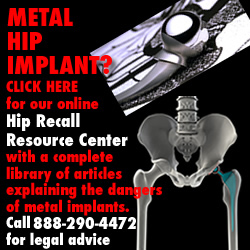 Protect your legal rights with a free consulation

An investigation of metal hip implants is long overdue. But if it curbs the FDA's fast track approval of dangerous medical devices, then it's better late than never.

Four Democratic leaders in the Energy and Commerce Department are calling for an investigation of metal-on-metal hip devices to determine if patients are being harmed by lax U.S. Food and Drug Administration (FDA) regulations governing medical devices. This echoes the sentiment expressed by Kershaw, Cutter & Ratinoff's Stuart Talley six months ago, when he attended a Congressional hearing alongside one of his clients who alleges she has been seriously injured by the DePuy ASR Acetabular metal-on-metal hip replacement device that was recalled in August of 2010.

Meanwhile, leaders in the bioscience industry, investors, researchers and government officials convened this week at the Biotech 2011 Conference. In attendance was Dr. Jeffrey Shuren, director of the FDA's Center for Devices and Radiological Health. Shuren responded to questions about regulation by stating that safety and innovation are "both sides of our mission."

"Unfortunately, medical device manufacturers carry more weight with the FDA than do the people harmed by their products," comments Talley. "And action on the part of the government is often too little, too late."

Talley's firm responded to the 2010 hip replacement recall by interviewing experts and researching the dangers of the DePuy ASR device. Since then, they've assisted hundreds of patients affected by dangerously high levels of cobalt and chromium leached from their defective hip implants. According to Talley, his clients have experienced the worst problems with the ASR and another DePuy implant that has not yet been recalled but may also cause similar problems with metallosis -- the metal-on-metal DePuy Pinnacle hip replacement device.

The firm launched a website to publish their findings, including dozens of medical journal reports and video interviews with an expert in metal toxicology explaining the dangers of cobalt and chromium ions released by metal-on-metal hip devices. The site has attracted thousands of hip replacement patients who have become increasingly concerned as their doctors monitor their steadily rising cobalt and chromium blood levels.

"An investigation of metal hip implants is long overdue," Talley says. "But if it curbs the FDA's fast track approval of dangerous medical devices, then it's better late than never."