Looking for iPhone Apps or iPad Apps? There’s an App for That Too 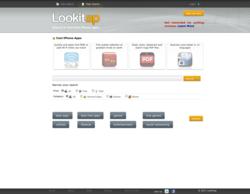 Lookitap's app ranking algorithm for apps is as powerful as Google's PageRank for web sites.

Lookitap is a new application search engine that filters through results to provide users with the most relevant and highly rated apps for their iPhone, iPad or iPod touch device.

With over half a million apps on the Apple App Store, finding the right application can be a daunting task. Relying on the current app recommendation systems or word-of-mouth can still lead to buyer’s remorse. Lookitap wants to change that by allowing smartphone users to find the best iPhone apps when they need them.

The Lookitap search engine is designed specifically to search for smartphone applications from the ground up. It delivers an unprecedented experience to app search and discovery. With its unique ranking system, Lookitap allows you to discover the best apps for any search query (i.e., “turn-by-turn navigation”, “outlook file converter”, “edit personal documents”, etc.) without sacrificing what you really want in your search query. "Lookitap's app ranking algorithm for apps is as powerful as Google's PageRank for web sites." said Hamid Molavian, co-founder of the company.

Lookitap relies on two main algorithms to deliver the best apps for iPhone, iPad and iPod Touch. As you search for an app, the search engine first decides which apps are related to your search query from a pool. This intelligent relevancy check is performed so that even conceptually related apps will be considered as potentially related to your query. For example, when you search for “food”, Lookitap will also consider “restaurant”, “recipe”, “calorie” and “nutrition” as potential candidates for your search term. The next step is to bring the high quality apps to the top. From thousands of related apps to your specific search query, Lookitap’s robust and unique ranking system then decides which apps are the best and sorts them accordingly. This way, when you search for an app, you can make sure the best and most related apps have been considered and sorted for you.

Besides the core search service, Lookitap offers other features to help you search iPhone apps with ease. Users can download the apps directly to their device and be rewarded for writing high quality reviews, as rated by others. Lookitap also makes life much easier for bloggers who want to introduce apps to their readers. Now they can embed a preview of the app in their website by simply using the embed code provided by Lookitap; as easy as embedding a YouTube video into your web site or blog.

Lookitap.com is a start-up company, based in Waterloo ON, specializing in mobile app search technology. The search engine is powered by two core technologies: the semantic relevancy algorithm and the app ranking algorithm, both developed in-house. Due to its unique search and ranking algorithms, Lookitap search engine finds the best and closest apps based on users’ specific search queries.