A recent study by dating website Tastebuds.fm found that fans of grunge rockers Nickelback are more likely to get ditched by their date 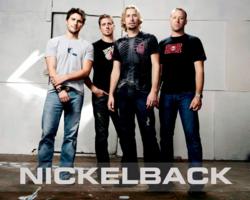 Women were more often turned off by female acts: Katy Perry, Taylor Swift, Rihanna, Miley Cyrus and Nicki Minaj made it into the women’s top 20 turnoffs but not the men’s

If you’re a fan of the music of Nickelback or Justin Bieber it may be best not to mention it on a first date – at least according to a survey carried out by Tastebuds.fm, the UK-based dating site which uses music taste to match singles.

With thousands of music fans signed up, the website is in a unique position to find out which artists are most likely to dampen desires.

The site - also responsible for the study that revealed fans of Coldplay are least likely to go all the way on a first date - asked their members to name up to 12 bands whose music they couldn't stand. Over 1,600 users responded, with Nickelback and Justin Bieber leading the nominations by a sizeable margin. The other artists that had the dubious honour of making it into the top 10 turnoffs were Lady Gaga, Ke$ha, Coldplay, U2, Creed, Katy Perry, Lil Wayne and Britney Spears.

“We were curious to know which bands people would be most horrified to discover when browsing their date’s iPod” explains Alex Parish, who founded the site with band-mate Julian Keenaghan, “as although sharing musical tastes with your partner is not the be all and end all it can certainly help in maintaining a harmonious relationship, and we've seen it's a great conversation starter“.

The study also examined how men and women’s musical turnoffs differed. Women were more often turned off by female acts: Katy Perry, Taylor Swift, Rihanna, Miley Cyrus and Nicki Minaj all made it into the women’s top 20 turnoffs but were nowhere to be seen in the men’s top 20 selections.

Some notable bands that men were turned off by - but that didn’t register with the ladies - include Oasis, Mumford and Sons, Kings of Leon, Eminem and Kanye West.

Tastebuds.fm is a dating site that uses musical taste to match singles. With thousands of users and hundreds of successful dates under their belts, the UK startup has attracted favourable press from the Guardian and NME among others, as well as the thanks of music fans everywhere.

How does it work?
Simply enter three or more of your favourite artists on the Tastebuds.fm homepage and they'll find you suitable matches in your area. If you have an account with Last.fm it's even easier - enter your username and your preferences will be imported.

Who's behind it?
The site was founded by two musicians from London, UK – Alex Parish and Julian Keenaghan. Both founders are members of the band Years Of Rice And Salt.
For more information, high res images, or to arrange interviews with Tastebuds.fm staff or users, please email press(at)tastebuds(dot)fm