This new release from Dog Ear Publishing explores the possibility that 8-year-old Ann Marie Burr was serial killer Ted Bundy's first victim. She vanished 50 years ago from her home in Tacoma, Wash., and her body was never found. The author first wrote about the girl’s disappearance in 2007 for The Seattle Times and spent hundreds of hours talking with Ann’s mother afterward. 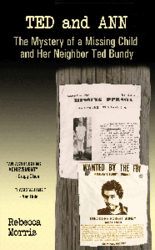 By the time he was a teenager, (Ted) Bundy was a thief, animal abuser and peeping tom who pulled little girls into the woods to scare them.

Serial killer Ted Bundy killed at least 35 girls and women – possibly hundreds – before the law caught up to him. He was just 3 years old when he threatened his teenage aunt with knives. By the time he was a teenager, Bundy was a thief, animal abuser and peeping tom who pulled little girls into the woods to scare them. This new book questions whether an 8-year-old girl, Ann Marie Burr, was his first victim. She disappeared from her home 50 years ago in a Tacoma, Wash., neighborhood, and her body has never been found.

Ted and Ann is the story of two Tacoma families, the Burrs and the Bundys, and two mothers with many things in common, including the fact that each would lose her oldest child in a horrific way. The author includes never-before-published photographs of a young Bundy, interviews with those who knew him and memories of the two families in her chilling, detailed account of Ann Burr’s disappearance.

Rebecca Morris first wrote about the girl’s disappearance in 2007 for The Seattle Times and spent hundreds of hours talking with Ann’s mother afterward. She pieces together decades of rumors, myths and facts in an attempt to solve the case, which never produced an arrest. Was Bundy telling the truth when he talked about killing Ann and dumping her into a muddy pit, or was that just another twist in an already horrific story? Morris’ book explores how Ann’s disappearance and Bundy’s crimes intersected and affected countless lives. (Bundy killed young women in Washington, Oregon, Idaho, Utah, Colorado and Florida and remains a suspect in other states; he was executed in 1989.)

Award-winning journalist Rebecca Morris has worked in radio and television news in New York City; Portand, Ore.; and Seattle. Her work has appeared in publications such as The Seattle Times, The Oregonian, People, Entertainment Weekly, New York Newsday, and American Theatre. To learn more and to contact the author, visit http://www.RebeccaTMorris.com.

Available at Ingram, Amazon.com, Barnes & Noble and fine bookstores everywhere. The e-book is available at http://www.CrimeRant.com.