Students and faculty from other universities have joined Penn State in a 40-day email series to pray for alleged victims and the crisis at Penn State says writer CS Heinz. 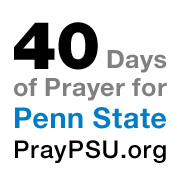 40 Days of Prayer for PSU

Universities that Penn State normally competes with in sports and academia are signing up to pray for Penn State. Our need for something and someone greater than ourselves is uniting us in this dark hour.

Students and faculty from other universities have joined Penn State in a 40-day email prayer series, according to State College writer CS Heinz.

The email series called "40 Days of Prayer for PSU," will help people pray for the crisis at Penn State including the alleged victims, their families, and abuse survivors. It is available at http://www.PrayPSU.org.

The prayer series was created by CS Heinz and is supported by area churches. "I started getting consumed by the news reports and opinions. Then I realized I hadn't asked God what He thought about the situation," Heinz said. "So I did and that's where the idea of starting this prayer movement came from."

In addition to students and faculty at Penn State, the prayer series has attracted people from universities like Ohio State, University of Virginia, Clemson, and University of Oklahoma.

"Universities that Penn State normally competes with in sports and academia are signing up to pray for Penn State," Heinz said. "Our need for something and someone greater than ourselves is uniting us in this dark hour. I think that’s why many people are turning to prayer."

"Many things need to change and that's why we're praying," Heinz said. Originally the series was 30 days long, but Heinz felt that 30 days wasn't enough. "In the Bible, 40 days often marked the beginning of a new season. That's what we need here, a new season."

Others agree. In addition to current faculty and students, members of the Penn State Alumni Association, one of the largest alumni groups in the world, have joined the series. Residents of State College, which is Penn State's hometown, have joined as well. And people who have been affected by sexual abuse are participating.

"Mark my words," Heinz said, "When we come together and pray, God will move."

Everyone is invited to sign up for the series at http://www.PrayPSU.org.

About CS Heinz
CS Heinz writes often about prayer at http://www.CSHeinz.com and is marketing director for EnergyCAP, Inc. He can be reached at CS(at)CSHeinz(dot)com or 814.574.4127.