Location based mobile dating app for gay men of the same sex. 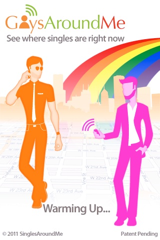 “With a half million downloads worldwide we are extremely excited to be able to offer a dedicated, sophisticated product for single gay men,” said Christopher Klotz, CEO of SinglesAroundMe Inc. “In counterpoint to other gay dating apps such as GuySpy, Grindr and Maleforce, GaysAroundMe offers a classy platform through which to meet other gay singles. It also allows users the opportunity to choose to display their location on a geographical map, which means it’s easier to meet up in real time.”

GaysAroundMe can be downloaded for the iPhone on iTunes here and before Christmas on the Blackberry.

SinglesAroundMe (SAM) is the world’s first location based mobile dating app to plot singles on a geographical map and first to be on all three major Smart phone platforms iPhone, Blackberry and Android. Founded in 2009, SAM is pioneering location based mobile dating and delivering technological innovations that break down barriers allowing singles to connect in ways never imaginable before.

Existing Gay users of Singles Around Me can login to the new Gays Around Me app with the same login details and all their information will be seamless between the two apps.

New York gay usersmap of gay users in the area