On December 10, 2011, at the American Foundation of Savoy Orders’ 14th Annual Benefit Gala, “Ballo di Savoia” (Savoy Ball), more than 270 patrons, benefactors and guests raised funds for the Latin Patriarchate’s University of Madaba Scholarship Program and other charitable initiatives. The Ballo was part of a three day weekend of events organized by the American Delegation of Savoy Orders and the Savoy Foundation, continuing the spirit and tradition of charitable giving and hospitaller care of the historic thousand year Dynastic Orders of Knighthood and Merit of the Royal House of Savoy. 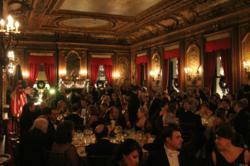 It was truly a memorable night and a real tribute to the Savoy Foundation volunteer efforts throughout the year. The event provided an outstanding social experience as well as raising needed funds for the charities supported by the Savoy Orders.

The elegant Metropolitan Club in New York City provided the sumptuous surroundings for the 14th Ballo di Savoia (Savoy Ball), the annual white-tie charity gala ball, on Saturday, December 10, 2011. The Ballo benefited the American Foundation of Savoy Orders' charitable and philanthropic initiatives in the fields of education, emergency disaster, medical and poverty relief, social services and children’s causes throughout the world, such as the New York Foundling Hospital, St. Jude’s Children’s Research Hospital, Doctors Without Borders, Casita Maria, among others. This year’s event also jointly benefited the Latin Patriarchate’s University of Madaba Scholarship Program to aid students in the Middle East. A welcoming reception at the Knickerbocker Club in New York City to kick-off the three days of events on the evening of December 9 was hosted by Savoy Foundation’s President Marco Grassi and Mrs. Cristina Grassi.

The annual ball, under the patronage of Their Royal Highness Prince Victor Emmanuel and Princess Marina of Savoy, is supported by the knights and dames of the American Delegation of Savoy Orders and friends of the Savoy Orders, an international association of the dynastic orders of the House of Savoy, continuing a thousand year tradition of goodwill through its honorable patrons and benefactors. The Honorary Committee consisted of Their Royal Highnesses Prince Emmanuel Philibert and Princess Clotilde of Savoy, Francesco Carlo Gricciolli Della Grigia, Johannes Niederhauser, Dr. Sergio Pellecchi, Marchesa Alexandra Rossi Longhi and Baroness Mariuccia Zerilli-Marimò.

The Ballo recreated the traditions and pageantry reminiscent of 19th century European court balls. Following a glittering reception in the main ballroom, dignitaries and guests, with gentlemen resplendent in tail coats and wearing colorful chivalric and military decorations and ladies in flowing ball gowns, descended the long marble staircases to strains of historic Savoy royal anthems and marches popular when Italy was a monarchy under the House of Savoy. The Mitch Kahn Orchestra once again provided dance music.

The gala also recognized Cindy and Mark Pigott, who established the Savoy Orders Pigott Scholarship Endowment in 2010 for students pursuing careers in the humanities and international studies.

Thanks to the efforts of Joseph Sciame, the Ballo Chairman, together with Vice-Chairs Mark Pigott and Cindy Pigott, Vivian Cardia, Dr. Timothy De Zastro, Mr. and Mrs. Thomas Pecora, and Mr. and Mrs. Anthony Viscogliosi, the stellar event was a sell out. Included among the Ballo Committee were Cristina Grassi, Baroness Flavia Frati-Spagnola and Gaetana Enders. Among the numerous guests were: His Excellency Archbishop Francis Chullikatt, Apostolic Nuncio and Permanent Representative of the Holy See to the United Nations; Mark Pigott, Chairman and CEO of PACCAR; Daniel McClory, Managing Director of Hunter Wise Financial Group; and former Congressman Frank Guarini.

Joseph Sciame, the 2011 Ballo Chairman, stated: “Philanthropists go the extra mile when times are hard, always looking for innovative ways to change the world through their gifts of time, talent and treasure. We can all do something to improve the human condition in this world, and to know that even one life has been brightened because of our efforts, is what the Savoy Orders is all about. While the calendar may be busy with events of social, cultural and charitable significance for all, the Savoy Orders will be in full force to celebrate the season and purposes of our Orders. We are already planning for 2012!”

About The American Delegation of Savoy Orders:
The American Delegation of Savoy Orders, which includes the United States of America and Canada, is a part of the Dynastic Orders of the Royal House of Savoy, among the oldest orders of chivalry in the world. The Savoy Orders are headquartered in Geneva, Switzerland and have 35 Delegations worldwide that support the ongoing charitable works of these ancient Dynastic Orders of Knighthood and Merit. Their origins and their principles, traditions and humanitarian goals date back a thousand years. HRH Prince Victor Emmanuel, Prince of Naples and Duke of Savoy, is Head of the House of Savoy and Grand Master of the Savoy Orders. His ancestor, King Victor Emmanuel II, united the nation of Italy under his rule between 1861 and 1870 and the Prince’s father, King Umberto II was Italy’s last reigning sovereign.

(l to r): Ms. Vivian Cardia, Baroness Mariuccia Zerilli-Marimò with Carl J. Morelli, Chairman of the Board of the American Foundation of Savoy Orders

Guests descend the Grand Staircase of the Metropolitan Club to the Ballroom for the Ballo di Savoia,