Chemist and longtime acoustic guitar player Matt Culver in Redding, Ca, has come up with an entirely new concept for playing guitar strings. He calls it the "Bionic pick" and believes it will eventually replace flat picks for most of the guitar playing community. 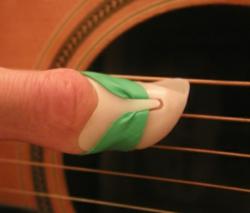 The new way to play guitar!

Matthew Culver, a career laboratory chemist in Redding, Ca, is finding he may be switching vocations with his new invention for guitar players which he calls the “Bionic pick”. "Fingerpicks, the kind you wear on your finger or thumb, have been around for years....at least a hundred" he says. “But most guitar players use the flat picks. My problem with that style is that you have to keep two fingers tied up to hold the thing. It doesn't make sense to people who have always played with their bare fingers."
A number of people over the years have tried to come up with something that you don't have to hold with your thumb and finger pinched together but nothing has really been created that has caught on with the mainstream guitar community.
Matt says "I didn't start out to create a new fingerpick. That's not what I had in mind at all. Two years ago I had already been out of lab work for a year and was looking around for anything to bring in some income. I've always enjoyed playing acoustic guitar and singing old popular songs, and I had this idea I wanted to record some of my favorites onto a CD that I could sell. That's when I realized that I needed a good, crisp guitar tone that I couldn't get with my bare fingers. My first try was taping some plastic onto my fingers, which, amazing, produced a good sound but was extremely painful. Then development went on from there. I really got sidetracked from my original project!"
The one thing that makes the Bionic pick work really well, he says, is it's shape. "It looks like an artificial finger--at least when you view it from above. This shape makes it extremely comfortable to wear, and has another advantage in that it's really difficult to dislodge it when you're playing--even really banging away.
"You really have to see it demonstrated", he says. "It's very easy to figure out when you see it in action. It makes total sense. Most people when they see it can't believe it's so simple. It's the kind of thing people see and think 'I could have thought of that'!." When you ask Matt why he thinks this design wasn't invented years ago he says simply that "it's been hidden--waiting for someone to find it."
Matt and his two partners, guitarist Marc Cooper and Pat Tennant have just launched their project on the Kickstarter.com funding website for entrepreneurs who are seeking funding to get their projects out to the public. "Kickstarter is our first disclosure of the Bionic pick, and our first funding venue", he says, "and we also hope to get some industry people involved when we attend the NAMM show in Anaheim next month."
Will the Bionic pick really change the way most people play guitars, mandolins, banjos, and anything that's strummed? Matt believes it will but it will take time. "You don't change people's habits overnight. I imagine our first customers will be kids just looking for something that makes a good sound that's easy and works. This does!"