10 Things You May Not Know About Groundhogs 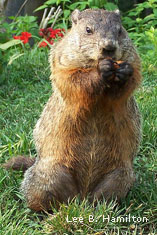 A woodchuck, or groundhog, during the warm months of grassy abundance.

Fact 6: During warm seasons, a groundhog may pack in more than a pound of vegetation at one sitting, which is much like a 150-pound man scarfing down a 15-pound steak.

The groundhog, also known as the woodchuck or the mouse bear (because it looks like a miniature bear when sitting upright), first won its reputation as a weather prognosticator in 1886, when the editor of western Pennsylvania’s Punxsutawney Spirit newspaper, one Clymer Freas, published a report that local groundhogs had not seen their shadows that day, signaling an early spring.

This story begat Punxsutawney Phil, the legendary woodchuck weathercreature, which begat Ground Hog Day and the familiar idea that Phil (and his namesake successors down through the years) can predict the perpetuation of winter.

It is likely that the story of Phil is based on European beliefs that badgers and hedgehogs can provide signals about the future; lacking those species in his area, old Clymer substituted the local animal that most resembles a badger or a hedgehog.

But the groundhog is much more than a weather rodent. It’s also a real animal with a real life.

Here are 10 things from the National Wildlife Federation about this roly-poly rodent:

1.Groundhogs are among the few animals that are true hibernators, fattening up in the warm seasons and snoozing for most of three months during the chill times.

2.While hibernating, a woodchuck’s body temperature can drop from about 99 degrees to as low as 37 (Humans go into mild hypothermia when their body temperature drops a mere 3 degrees, lose consciousness at 82 degrees and face death below 70 degrees).

3.The heart rate of a hibernating woodchuck slows from about 80 beats per minute to 5.

4.Breathing slows from around 16 breaths per minute to as few as 2.

5.During hibernation—150 days without eating—a woodchuck will lose no more than a fourth of its body weight thanks to all the energy saved by the lower metabolism.

6.During warm seasons, a groundhog may pack in more than a pound of vegetation at one sitting, which is much like a 150-pound man scarfing down a 15-pound steak.

7.To accommodate its bodacious appetite, woodchucks grow upper and lower incisors that can withstand wear and tear because they grow about a sixteenth of an inch each week.

8.If properly aligned, woodchuck upper and lower incisors grind away at each other with every bite, keeping suitably short; when not in good order, they may miss one another and just keep growing until they look like the tusks on a wild boar; if too long, a woodchuck’s upper incisors can impale the lower jaw, with fatal results.

9.Woodchuck burrows, which the animals dig as much as 6 feet deep, can meander underground for 20 feet or more, usually with two entrances but in some cases with nearly a dozen.

10.Burrows provide groundhogs with their chief means of evading enemies, because the rotund little guys (just before hibernation, a hefty woodchuck may tip the scales at 14 pounds) are too slow to escape most predators in a dead heat: the rodents have a top speed of only 8 mph, while a hungry fox may hit 25 mph.

Bonus Fact: Although groundhogs may not be the best weather predictors, they do in fact emerge from dens in early February. This is the practice of males as they rouse themselves to wander around their 2- to 3-acre territories in search of burrows belonging to females, which the males will enter and where they may spend the night. Research suggests that no mating takes place at this time; the visits probably just let the animals get to know one another so that they can get right down to the business of breeding when they emerge for good in March. Outside of the mating season, woodchucks are solitary, except for females with young, which usually are born in early April.

To learn more about groundhogs and other wildlife, visit http://www.nwf.org.

Celebrating 75 years of inspiring Americans to protect wildlife for our children's future.