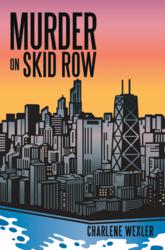 Chicago’s Skid Row during the high-charged, violent 1960’s looms in the background of Wexler’s tale of an unlikely hero caught in the crosshairs of a disastrous plot.

A forsaken segment of Chicago history is resurrected in the enthralling new pages of Charlene Wexler’s mystery novel, Murder on Skid Row (published by AuthorHouse).

Chicago’s Skid Row during the high-charged, violent 1960’s looms in the background of Wexler’s tale of an unlikely hero caught in the crosshairs of a disastrous plot. In a world populated by hustlers, winos, addicts, bums, lost souls, rip-offs and kickbacks, a young and naïve Dr. Mel Greenberg hopes to make his mark on the grand city of Chicago. Opening his new dental office in an effort to help the downtrodden residents of Skid Row, Mel takes a risk that might not be worth all of his good intentions.

His friend and guide into the underworld is Abe, the owner of one of the last thriving businesses on Skid Row. It isn’t long before Mel discovers that his middle-class upbringing and education will get him nowhere on the streets of Madison. Unprepared for what Skid Row has in store, Mel finds himself singled out as the most likely suspect for murder.

In a part of town where dark secrets go to rest, Mel must uncover the truth before justice will see the light of day. Based on a true story, mystery lovers, history buffs and Chicago natives will all find something to enjoy with the thrilling Murder on Skid Row.

About the Author
Native Chicagoan Charlene Wexler is a graduate of the University of Illinois. She has worked as a teacher and dental office bookkeeper. As a wife, mom and grandmother, Wexler has found the time to pursue her love of writing in a series of essays and her first foray into fiction. Her work has appeared in several publications, including North Shore Magazine, the University of Illinois at Chicago College of Dentistry’s Vision magazine, Alpha Omegan and the Chicago Gazette. Her first novel, Murder on Skid Row, received an Apex Award of Excellence from Communications Concepts in 2010. Wexler and her husband, Dr. Sam Wexler, live in Richmond, Ill.

AuthorHouse is the leading provider of self- publishing, marketing, and bookselling services for authors around the globe. For more information, visit http://www.authorhouse.com.