Addressing Donald Trump's challenge to look at what might be "the greatest scam in history"... By looking at the birther argument through the prism of The Duck School, the school of common sense, and by focusing on Obama's parents, Donald Trump's claim begins to look petulant... 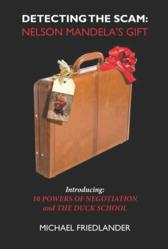 If someone tells us the duck is a swan, it doesn’t matter how rich or well-educated or powerful the messenger might be, until he can persuade us that what we are looking at is indeed a swan, the duck will remain a duck. This is the Donald's burden...

In a recent article, Michael Friedlander, author of Detecting the Scam: Nelson Mandela's Gift, has looked into Donald Trump's claim about what might be the "greatest scam in history."

In his article, Friedlander suggests that his invention, The Duck School, the school of common sense, might offer an interesting approach in looking at Trump's claim. He explains that the first rule of The Duck School is that, if something looks like a duck, walks like a duck, and quacks like a duck, we have to trust ourselves that we might just be looking at a duck. The second rule might apply specifically to Trump: If someone tells us the duck is a swan, it doesn’t matter how rich or well-educated or powerful the messenger might be, until he can persuade us that what we are looking at is indeed a swan, the duck will remain a duck. Friedlander argues this is Trump's burden. A third rule also applies to Trump: It doesn't matter how many times someone calls the duck a swan, mere repetition of the lie won't turn it into a swan.

Friedlander believes that the duck we are looking at is a birth certificate issued by the state of Hawaii. Both Hawaii’s Republican health director (appointed by Republican Governor Linda Lingle), and Hawaii’s state registrar have affirmed its authenticity by verifying that the health department holds the President's original birth certificate. Then, in 2008, Jess Henig and Joe Miller at the Annenberg Public Policy Center at the University of Pennsylvania declared that they had "seen, touched, examined, and photographed the original birth certificate" and that it "meets all of the requirements from the State Department for proving U.S. citizenship."

Despite this, Trump now claims that all is not what it seems. According to him, the President's parents somehow managed to scam the state of Hawaii into certifying that their son was born in Hawaii when, in fact, he was really born in Kenya.

Central to Trump's position is that the future President's parents wanted their child to have the opportunity to be president. Friedlander points out that this was never about the citizenship. The law then was as clear as it is now: Any child of an American citizen could become a citizen and there was never a dispute that the President’s then 18-year-old mother was an American citizen. To become president of the United States, however, their child had to be born in the United States.

Friedlander points out that, instead of waiting in the United States for a few months until the birth of their child, according to Trump's contention, the parents apparently inexplicably decided to leave for Kenya to have their child there. In making that decision, the parents were apparently not only convinced that they could pull off the “greatest scam in history” by being able to deceive the state of Hawaii, they were also convinced that, whatever the race of their child, the country would later accept as president the child of an interracial couple. This was even though, at that time, half of the country had banned interracial marriage. Friedlander argues that this young starry-eyed and visionary interracial couple must have fervently believed in the future racial tolerance of this country. Perhaps they also believed that, even if their child was black, he or she could have become president. Maybe they were visionaries...

Friedlander contends that, to pull off their scam, the young couple would somehow have to travel to Kenya invisibly without generating any attention -- and without generating any travel or hospital records. And they were hardly inconspicuous. They were an 18-year-old pregnant white woman and her young black husband traveling on multiple planes through multiple airports. To travel invisibly would be a remarkable challenge. Apart from their travel to Kenya, Friedlander argues that, once they were there, they would also have to remove any trace of their presence at the Kenyan hospital where their son was born. And, somehow, after the birth, they would also have to stay out of sight for fear of anyone in Kenya remembering seeing the interracial couple with their tiny black baby. And then Friedlander points out, there was the trip back to Hawaii...

As for the contemporaneous birth announcements that were published in Hawaii newspapers, Friedlander argues that, with the help of accomplices in Hawaii, the parents could easily have made advance plans for someone to publish these. What remains unclear to Friedlander, however, is how the parents could have deceived the state of Hawaii into issuing a birth certificate for a child born in Kenya?

Friedlander argues that there were two ways for Trump to prove the existence of the scam: First, he could find someone who would remember seeing the distinctive interracial couple either on a plane, at an airport, or in a Kenyan hospital or store. Second, he could explain how the parents managed to deceive the state of Hawaii. Just as he argues in his critically acclaimed book, Friedlander argues that the burden here is Trump’s - not only to show how it could be done, but also that they did it…

Friedlander addresses the argument that this issue could be put to bed if only the President would consent to release his original birth certificate. He argues, however, that, if the document reveals, for example, that the doctors and attendants who delivered the young Obama are now deceased, Trump and his fellow birthers will almost certainly argue the existence of another massive conspiracy relating to their deaths. Friedlander suggests that this might explain why the President might prefer to rather sit back and just enjoy watching Trump try to explain how the parents managed to pull off "the greatest scam in history."

The scammers greatest wish: A mark who wants to believe so badly that he or she refuses to apply the rules of The Duck School.