Europe’s Energy Future is Not Only About Energy Efficiency, it’s Also About ‘Efficient Energy’

• European Commission states that nations must spend €270 billion over the next 40 years to get back to pre-recession levels and meet 2050 energy objectives. • REFER – Responsible Energy for European Regions – has just published a new report that shows what bold, long-term thinking and best practices can generate for consumers, businesses, the economy and the environment. 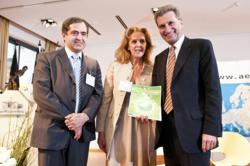 “Energy Efficiency or what we prefer to call ‘Efficient energy’ is more than just reducing greenhouse gases; it is about the efficient use of our resources, our fuel, water and land.

The Assembly of European Regions – GE Energy partnership today further proved the success of their close collaboration with the publication of the REFER Report; a study which looks closely at the challenges facing Europe and its regions and the energy efficient solutions they are employing.

Presented by Michèle Sabban, President of the Assembly of European Regions, and Ricardo Cordoba, President of GE Energy for Western Europe and North Africa, as part of the 2nd Annual European Regions Energy Day, the REFER Report features research from the soon-to-be-released ‘Delta Study’, an exclusively commissioned report into understanding the benefits of supply-side energy efficiency, as well as the results of the AER survey on regional investments in energy projects.

“Energy Efficiency or what we prefer to call ‘Efficient energy’ is more than just reducing greenhouse gases; it is about the efficient use of our resources, our fuel, water and land. In general it is about driving the development of more resource efficient energy production and delivery sectors in Europe; activities to which GE Energy is entirely committed,” said Ricardo Cordoba.

“Regions are perfectly placed to implement energy efficiency initiatives; they offer unique resources that can drive the diverse energy mix required to support low carbon energy. They have great experience with energy investments and infrastructure, they are key to planning and consent, and they are actively engaged and exercise an increasing influence over energy strategy in their territories,” stated Michèle Sabban.

By placing the spotlight on the many proven, cost-effective and reliable supply-side technologies that are already deployed, and the regions who are benefitting from them, the REFER Report shows that a reinvigoration of supply-side opportunities or more resource-efficient electric power generation is a strategic imperative for Europe.

It looks at technologies such as fuel switching in the power sector – specifically from coal to natural gas, power plant optimisation and other measures to improve the efficiency of existing CCGT power plants, and combined heat and power (CHP), from micro-scale residential projects to large-scale industrial ones. The report also covers the emergence of smart grid technologies – as smart grid technology forms a major part of the EU 2050 roadmap and opportunities to develop them are receiving significant attention at EU level, but so far these have not gained traction in the member states.

Baden-Württemberg in Germany, for example, aims to have 100 “Bio-energy Villages,” an initiative that will use biogas plants that will produce electricity and capture lost heat, thus generating significant savings from the region. While in Lower Silesia in Poland there is significant development being made in the replacement of aging coal-fired plants with new biogas plants.

EU member states and regions have until 2013 to get back on track to meet the target for a 20% improvement in energy efficiency. If the Commission’s progress review still proves to be disappointing, the Commission will consider legally binding targets for 2020. The regions and technologies profiled in the REFER Report show that there is real progress being made. It demonstrates that with greater uptake of supply-side efficiency, significant contributions can be made to not only the achievement of the EU climate and energy efficiency targets, but also how we can make this happen, what barriers need to be removed and what incentives we need to introduce to turn this potential into a reality.

All press releases & pictures can be found on the press room
http://uk.geenergyeurope-pressroom.com/

About GE Energy and the AER

In May 2009, the Assembly of European Regions - Europe's largest network of regions - and GE Energy, an established European and global player, launched "European Regions Energy Day", a joint initiative to tackle the energy challenges facing European regions today and to promote possible solutions. It is the first summit to bring together regional decision makers and European energy experts and is held annually in Brussels, Belgium.

The European regions are a key player in the choice of the energy solutions to be implemented in their territories. That is why Michèle Sabban, AER President and Ricardo Cordoba, President of GE Energy Western Europe & North Africa, have joined forces to address climate change issues at a regional European level. The partnership creates a unique gateway between globally renowned energy experts and regional public decision makers; it also supports the European Union's energy and environment strategy while creating a benchmark centre of expertise and solutions in the energy field for all the European regions.

The program for the European Energy Summit is available on AER site at http://www.aer.eu.