Linda has been invited to exhibit her piece "Treehaven #2" at the international juried pastel exhibition in Giverny, France this May as French interest in her work continues to grow. 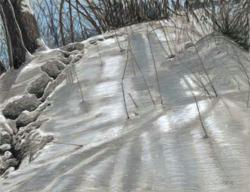 "Footsteps #2" shows Linda's trademark ability to pour sunlight onto snow in a manner that stills the viewer and pulls him or her into the solitude and quiet of that moment of that place.

Linda has become the "goddess of snow" in the way she combines sunlight, silence, snow, and trees into a winter meditation on canvas.

April 24, 2011 -- Linda Gross Brown is left breathless more and more often by her growing accolades in the art world. That world began solely as the United States, from the east coast to the west. But as is true concerning good news - it spreads. And spread it has. The artist who was once blown away by the reception she received in New York City exhibitions is now experiencing déjà vu as Europe - France in particular - is ballooning with excitement about her work. French art lovers have poured into her fan base on Facebook and Twitter, and now they'll be able to see her work stateside.

Linda has become the "goddess of snow" in the way she combines sunlight, silence, snow, and trees into a winter meditation on canvas. Looking at her paintings and feeling the stillness of that secret, ephemeral moment are fused together - inseparable. It is that effect that spreads over new viewers and wins them as devoted followers of her artwork. That experience is unaffected by country, culture or language - and so French art lovers are counting themselves among those devoted followers.