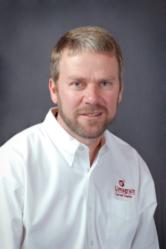 Don’s leadership will be instrumental in developing wheat that is more profitable and productive for farmers.-Frank Curtis

Limagrain Cereal Seeds, a subsidiary of the biggest plant breeder and seed company in Europe, announced Don Obert has been hired as a wheat breeder for the company’s regional research station located in Battle Ground, Ind. Obert comes to Limagrain Cereal Seeds after nearly a decade as a research geneticist for the U.S. Department of Agriculture.

“Don’s depth and breadth of knowledge in plant breeding and genetics lends itself well to Limagrain’s soft red winter wheat program,” said Frank Curtis, Limagrain Cereal Seeds Executive Vice President and Chief Operating Officer. “As a market class that is grown by farmers in 25 different U.S. states, soft red winter wheat requires breeding for consistency and performance in a wide variety of conditions. Don’s leadership will be instrumental in developing wheat that is more profitable and productive for farmers.”

“I think I fit well with Limagrain’s objectives of producing an improved product – in this case wheat varieties – as I enjoy developing something that is of benefit to people,” said Obert. “I enjoy doing research that will directly benefit both the farmer and the consumer, and having the opportunity to develop products that enhance agriculture.”

Obert said he also enjoys gardening, being involved in his church, spending time with family and coaching T-ball.
He has a wife, Jacque, and three children: Benjamin, Hannah and Emma.

Group Limagrain was founded in France in 1942. The farmer-owned company has 7,000 employees and is the largest seed company in the European Union. Fort Collins, Colorado, is the headquarters for the group’s North American subsidiary Limagrain Cereal Seeds, which has regional operations located in Washington, Indiana, Minnesota and Kansas. Limagrain’s business focus is to create and market proprietary wheat seed varieties to sell to professional seed producers, who then market the seed varieties to their customers.