The Network Journal (http://www.tnj.com), the New York tri-state’s premier monthly magazine for Black professionals, corporate executives and small business owners, announces the winners of its much-anticipated 2011 “40 Under Forty Achievers Awards”, which recognizes achievers who are continuously reaching for higher goals in their professions, businesses and community involvement. 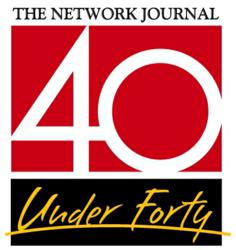 This year's class of honorees hails from a diverse range of industries, including media, technology, arts, culture, finance, and healthcare. TNJ will honor them on Thursday, June 16, 2011, at its 14th Annual 40 Under Forty Achievers Awards Dinner, to be hosted by Sharita Brantley, Segment Producer for CNBC and Terrance McKnight, Classical 105.9 FM WQXR Host. The event will be held at the Crowne Plaza Hotel in Times Square, New York City, from 6:30 p.m. to 10:00 p.m. The dinner is sponsored by Wells Fargo and WBLS Radio.

TNJ created the 40 Under Forty Achievers Awards in 1997 to publicly recognize the next generation of African-American leaders who already are exceptional performers in their respective industries, and who are committed to the development of their community. Competition for the awards has become increasingly intense, with the number of entries growing exponentially each year, and the achievements of the entrants more and more amazing. It is almost presumptuous to choose winners, for clearly there are no losers among these candidates. TNJ salutes them all – both those who made the honoree list and those who did not.

“As we celebrate the 14th year of our 40 Under Forty Achievers Awards, TNJ cherishes its role as a facilitator for our up-and-coming African-American men and women to progress even further in their careers. Through events such as our recognition awards program, TNJ brings these accomplished professionals to the attention of our vast network of corporate affiliations,” says Aziz Gueye Adetimirin, TNJ’s founder, publisher and CEO.

This year’s honorees follow in the footsteps of such notable winners as Soledad O’Brien, anchor and special correspondent for CNN/US; Randall Pinkett, BCT Partners; and actor Malika Yoba.

This year’s honorees are: