With up to 50% of office workers suffering with neck/shoulder pain, this simple and inexpensive treatment could improve productivity and reduce healthcare costs. (News Source: Performance Health) 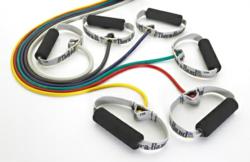 Neck pain combined with shoulder pain is a common problem among desk workers, particularly those using a desktop computer. One study noted a 50% incidence of neck/shoulder pain(1) over a one-year period. Lars Andersen, PhD, and his colleagues in Copenhagen, Denmark, completed a randomized controlled trial of 198 office workers with neck and shoulder pain, and tenderness to palpation(2). This study was presented at the 58th Annual Meeting of the American College of Sports Medicine and 2nd World Congress on Exercise is Medicine®, which was held from May 31 to June 4, 2011 in Denver, Colorado.

“With up to 50% of office workers suffering with neck and shoulder pain, most employers likely experience a loss of productivity as well as higher healthcare costs,” stated Lars L. Andersen, PhD, researcher with the National Research Centre for the Working Environment in Copenhagen, Denmark. “We have previously shown that neck and shoulder pain increases the risk for long-term sickness absence(3). Although regular physical exercise is a cornerstone for wellness programs, adherence to comprehensive exercise remains low. So we set out to develop an exercise program that was as simple and feasible as possible.”

The trial utilized Thera-Band® Elastic Tubing with handles for an exercise routine using only one exercise for either two or 12 minutes. The subjects were randomly assigned to either a non-exercising control group, a two-minute exercise group, or a 12-minute exercise group. The exercise groups performed a lateral raise with the arm slightly in front of the body while using elastic tubing for resistance.

Office workers and companies can purchase the Thera-Band Elastic Tubing referenced in the research at http://www.quill.com/thera-band.

Disclosure: Thera-Band Academy provided tubing used in this study, but did not provide monetary funding.