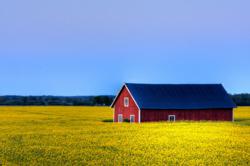 Capital Corp Merchant Banking has entered into a $64 million funding agreement for a $70.6 million project with its Client. The funding was engineered by Capital Corp's President & CEO, Gilles Herard, Jr.

The funding agreement Mr Herard designed and structure is based on a mix of debenture and common stock. Funding for the project is to be disbursed as follows: equity funding in the amount of $4 million, accompanied by debenture money in the amount of $60 million, for a total of $64 million. Further to the grace period, the debenture is repayable with equal, consecutive monthly payments of principal until fully paid.

Funding will be used specifically for the purchase, construction, and operation of a 900 metric-ton-per-day rapeseed extraction and processing facility, to be located in Reni, Ukraine.

Rapeseed is also known as rapaseed, rapa, oilseed rape, and rappi. It is used to produce canola oil (for human consumption), animal feed, and biodiesel; leading producers include the European Union, Canada, the United States, Australia, China, and India. According to the United States Department of Agriculture, rapeseed was the third leading source of vegetable oil in the world in 2000, after soybean and oil palm, and also the world's leading source of protein meal, although only one-fifth of the production of the leading soybean meal. Only recently in the news, it was reported that the cultivation of rapeseed boosted the economy of a destitute region of China.

The advantages of this funding agreement are numerous: the Client, a Toronto, Canada-based company, has extensive experience in the agriculture industry, it has off-take agreements in place for 100% of production, all permits are in place, ready to be construction, and the support from local and governmental bodies is strong. What's more, this plant is located in Reni, in the region of Odessa. Reni is a port city near the mouth of the Danube River in the southwestern part of the Ukraine with nearby border with Romania and Moldova. The Reni Plant will be the only existing or proposed rapeseed processing plant on the Danube, providing excellent transportation directly into the EU market, not to mention that its location puts it in relative proximity to the poultry and dairy production industries of Turkey, creating a marketing advantage for rapeseed meal.

The plant's profitability will be derived from its "Crush Margin," that is, the difference in price between the unprocessed seed and the product extracted after the crushing. The Crush Margin for rapeseed plant has historically been both profitable and stable due to expanding markets and tight correlation between seed costs and oil/meal revenue.

The method by which this project is to be funded is the brainchild of Mr Herard. Mr Herard is a seasoned merchant banker and has been in the banking industry for 38 years. He worked early in his career at the Toronto Dominion Bank (Canada) and later on joined Manufacturer Hanover (MH) of New York as Senior Credit Analyst. He eventually created his own Firm, Capital Corp Merchant Banking, where he syndicates and structures funding for top companies worldwide, all the while investing his own firm’s funds into the projects. As the head of Capital Corp Merchant Banking, Mr Herard has become a leading figure in international middle-market project financing and engineers all funding structures for projects at Capital Corp. Mr Herard has received numerous awards for his work and other contributions including being appointed to the Presidential Business Commission, Honorary Co-Chairman of the Business Advisory Council, nominated as Executive of the Year by the internationally acclaimed National Register’s Who’s Who, and having received the Senatorial Medal of Freedom, among many others.