Male and female circumcision collide in Foreskin Man #3 when America’s most controversial superhero attempts a daring rescue in the jungles of Kenya. 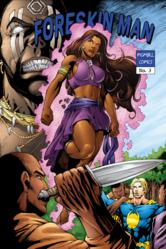 I think everyone has met at least one person who believes that circumcising girls should be a crime, but circumcising boys is okay.

When a worried mother fears that her son has been kidnapped to be circumcised, Miles Hastwick departs on an expedition to a remote Kenyan village to search for the boy. Miles soon learns that Africa is a far different place than America, and even his alter ego Foreskin Man will need help if he is going to survive his most dangerous and complex mission yet.

Foreskin Man #3 is written by Matthew Hess and combines the talents of two commissioned artists for the illustrations. Hess is president of MGMbill.org, an intactivist group pushing for federal, state, and local laws that would protect boys from medically unnecessary circumcision the same way that girls are protected.

“Despite significant progress being made to eradicate it, genital cutting of girls is still far too common,” said Hess. “I wanted to create a superhero who would fight against female circumcision, too, and so I dreamed up Vulva Girl. With the Siri Amulet as her energy source, Vulva Girl uses the power of flight and psychokinesis to help her confront Africa’s most notorious female circumcisers.”

The Anti-Defamation League added more fuel to the fire when they filed a joint lawsuit in the San Francisco County Superior Court of California to pull Hess’s San Francisco MGM Bill from the November 2011 ballot. Foreskin Man #2 and Foreskin Man trading cards 1 – 18 are marked as “Exhibit A” in a supportive declaration for case #CPF-11-511370 filed by Morrison & Foerster LLP, the plaintiffs’ attorneys.

Foreskin Man #3 is available to read and download for free at http://www.foreskinman.com. Printed copies may also be purchased online, or by ordering through a local comic book shop.