Symphony In The Glen Releases “Observations: Symphonic Encounters from Galileo to the Space Age” 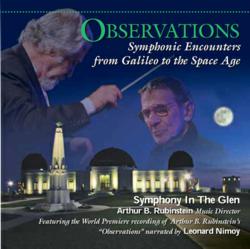 “Arthur B. Rubinstein’s inspiring and enchanting “Observations” is a journey in music and poetry as moving as standing under a starry sky..."
- K.C. Cole

In celebration of 2009 as the International Year of Astronomy, Griffith Observatory, Friends Of The Observatory and Symphony In The Glen presented “Cosmic Conjunction” on the front lawn of the observatory -- a spectacular concert honoring Galileo, featuring Symphony In The Glen, conducted by famed composer/conductor Arthur B. Rubinstein. The stellar event also featured the World Premiere performance of Observations -- an original composition by Maestro Rubinstein with narrative text by Griffith Observatory Director Dr. E. C. Krupp, narrated for the occasion by acclaimed actor Leonard Nimoy (Star Trek). “Observations: Symphonic Encounters from Galileo to the Space Age”, a studio recording of the music performed at the historic concert, is now available for digital download on iTunes.

“In composing ‘Observations,” says Rubinstein, “I wanted to create a musical ‘time travelogue’ that spanned from the primitive mysticism of the ancients to the symphonic ‘Big Bang’ of the moderns and ultimately encompasses the childlike wonder and awe that draws us to the stars.”

The “Cosmic Conjunction” event celebrated the intersection of astronomy and the arts with performances of five centuries of music with astronomical themes honoring the father of modern observational astronomy, Galileo. Recorded at Fox Studios’ famous Newman Scoring Stage, this magnificent recording vibrantly captures the evening’s selections. The “Observations” release also includes a downloadable digital booklet of the full-color program from the original concert event held at The Griffith Observatory in Los Angeles on Sunday, October 4th, 2009.

“Arthur B. Rubinstein’s inspiring and enchanting “Observations” is a journey in music and poetry as moving as standing under a starry sky. The collection, and especially Rubinstein’s original composition, wash over you with the vastness and mystery of space itself; from the moon and seasons to the grandeur of galaxies and the eternally surprising discoveries that illuminate them; revealing one exotic new vision after another. Alternating profound darkness and twinkling (sometimes blinding) light, Rubinstein’s work makes the “music of the spheres” ring truer than ever.”

Long-time science writer for the Los Angeles Times
Professor at USC’s Annenberg School of Journalism. http://annenberg.usc.edu/
Author of national bestseller: The Universe and the Teacup: The Mathematics of Truth and Beauty

1. Orfeo “Overture” Fanfare – Claude Monteverdi
This heavenly anthem is from Claudio Monteverdi’s opera about Orpheus – the legendary musician of ancient Thrace who plucked his songs on a lyre whose seven strings     represented the seven ancient planets. This piece was composed close to the time that Galileo first turned his telescope to the sky.

2. – 5. “Suite” from Castor et Pollux – Jean Philipe Rameau
Castor and Pollux are the heavenly twin sons of Zeus (Jupiter). As legend tells, when Castor dies, Pollux asks Zeus to grant him immortality. Zeus turns the twins into the bright stars in the constellation Gemini. Rameau’s music for the Castor’s funeral and the subsequent rising of the twins to the heavens is one of the most divine pieces of music from the early 18th century.

6. “Aux Etoiles” (“To the Stars”) – Henri Duparc
19th century Romantic composer Henri Duparc was known principally for his art songs. He was engaged to compose incidental music to a now-lost play. Happily what survives from the score is his sublime Entr’acte, which compels the listener to look toward the heavens and question the mystery and wonder of the stars.