An intrepid team of ten supporters of the international nonprofit Save One Life will attempt to summit Mt. Kilimanjaro in August. The climb is a fundraiser for Save One Life, which provides sponsorship for patients with hemophilia in developing countries. The team hopes to raise at least $50,000 for Save One Life’s Africa programs. 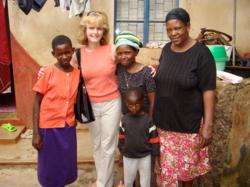 In addition to our fundraising goals, this climb will shine a spotlight on hemophilia care in Africa. We will inspire people to make a difference in the lives of people affected by this life-threatening blood disorder, says Neil Herson of ASD Healthcare.

Save One Life founder Laurie Kelley is the mother of a child with the blood disorder hemophilia, and president of LA Kelley Communications, Inc., a company that creates and publishes educational materials for parents and patients. Kelley has been traveling to Africa since 1999 and was the first in the global hemophilia community to introduce hemophilia medicine in several African countries, and to begin establishing national care.

Hemophilia is a rare hereditary blood disorder affecting one in 5,000 male births. The 17,000 Americans with hemophilia receive blood-clotting medicine called “factor” to help their blood clot correctly. Untreated, bleeding can cause extreme pain, joint and muscle swelling, blood loss, anemia, crippling, and even death. Only 25% of the world’s estimated 400,000 with hemophilia receive treatment. Most patients in Africa remain undiagnosed, and factor is scarce. Funds from the climb will help outreach programs to identify more patients.

The climb is the brainchild of Eric Hill, president of BioRx, a company that distributes factor. He and employee Jeff Salantai, who has hemophilia, summited Mt. Rainer last year. Climber Neil Herson is president and founder of ASD Healthcare, a major distributor of biological products in the US. Originally from South Africa, Herson understands the challenges of limited healthcare in developing countries: “In addition to our fundraising goals, this climb will shine a spotlight on hemophilia care in Africa. We will inspire people to make a difference in the lives of people affected by this life-threatening blood disorder.”

At 19,340 ft., Kilimanjaro is Africa’s highest mountain. The six-day trek, starting August 6, takes climbers from tropical weather to sub-freezing temperatures at the summit, where oxygen is only 50% of that at sea level.

Funds raised from the climb will be used to support an outreach program in Zimbabwe; establish a post-secondary scholarship program in Kenya; prepare Tanzania and Ghana to launch Save One Life programs.

Save One Life was founded in 2001 and provides financial sponsorships for 750 people with hemophilia and related bleeding disorders in 11 countries.

For information: Martha Hopewell, Save One Life executive director, (978) 352-7652.
To sponsor a climber: http://www.SaveOneLife.net