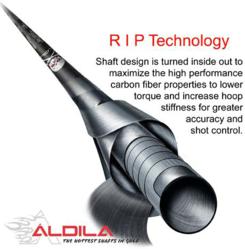 The Hottest Shafts in Golf

Aldila’s three patented shaft design technologies continue to prove themselves each and every week on the PGA, Nationwide and European Tours

The lowest amateur at the British Open added more Aldila golf shafts to his arsenal before the tournament began and ended the first day tied for first with a record-setting 65. He switched his driver shaft to Aldila’s VooDoo to go with the VooDoo he was playing in his 3 wood and switched his 5 wood to Aldila’s NV shaft. The 20-year-old finished with the silver medal for low amateur honors and walked away tied for 30th place overall.

On the Nationwide Tour Aldila’s VS Proto helped the winner of the Chiquita Classic notch his first career victory on Tour. He finished with a three-stoke lead earning a first-place check for $99,000. The win catapulted him from No. 27 to No. 5 on the money list. The top 25 money leaders on the Nationwide Tour earn their Tour cards for the 2012 PGA Tour. Six of the Top 10 finishers at the Chiquita Classic play Aldila golf shafts.

“Aldila’s three patented shaft design technologies continue to prove themselves each and every week on the PGA, Nationwide and European Tours,” said Stewart Bahl, Aldila’s Marketing Manager. “The three technologies, Reverse Interlaminar Placement, Stabilized Core and Micro Laminate each offer players of all abilities optimum performance to maximize the potential of their individual swing.”

Aldila’s patented shaft design technologies provide the perfect balance of applied art and engineering. They are continually on the leading edge of the golf world through their relentless pursuit of the next best innovation. They do the experimenting so you don’t have to. Pushing success to the edge and redefining how power should feel. Are you playing Aldila, or just graphite?

ABOUT ALDILA
Aldila is publicly traded on OTCQX and is the world’s premier manufacturer of high performance graphite golf shafts, composite prepreg and carbon fiber arrows. Aldila engineers continually advance and redefine golf shaft technology. Since 1972, Aldila has led the graphite golf shaft industry with more patented technology, manufacturing and process innovation than any other shaft manufacturer. In 2010 Aldila was the #1 graphite shaft on Tour with more wood shafts in play and nearly twice as many hybrids as the next leading competitor, according to the Darrell Survey. Aldila was also the #1 graphite shaft in play during the 2010 FedEx Cup. For more information on the RIP®, VooDoo®, DVS™, MOI Proto™, VS Proto™, and NV® shafts, visit their Web site at http://www.aldila.com. Follow what’s new on http://www.Facebook.com/AldilaGolf.