Change leadership expert and author, Brett Clay, says the closing of Borders Books demonstrates the fate of companies that adapt to change, rather than lead change. “The companies that follow, rather than lead in today’s fast-changing market put themselves at a severe disadvantage,” says Clay. “Like so many companies today, Borders failed to shift with the market—in this case from paper, brick and mortar to electronic and Internet. Company executives should be asking themselves, ‘What are we doing to be the leader, rather than the loser in our market?’” says Clay. 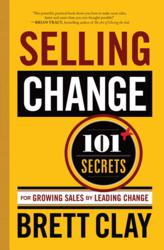 The winners in today's market are highly agile companies that are making change happen--they're change leaders.

Brett Clay, author of ‘Selling Change, 101+ Secrets for Growing Sales by Leading Change’, named the best business book of 2010 by Independent Publisher Book Awards says the closing of Borders Books not only marks the end of an era and the beginning of a new era, but it also demonstrates the fate of companies that follow the approach of change management, rather than change leadership.

“The liquidation of Borders Books marks the end of the paper-book and brick-and-mortar bookstore era. And it heralds the new era of the electronic book and Internet bookstore,” says Clay. While ebooks sales have already exceeded paper book sales, according to Amazon.com, the permanent closing of 400 book stores is a vivid milestone in the evolution of the publishing industry.

Borders’ management faced formidable constraints, such as store leases, that inhibited its ability to shift with the market. The Borders situation further demonstrates the paramount importance of agility in today’s market. In the past, managers used return-on-investment arguments to justify their budgets and spending. “Today, managers should be prioritizing investments using ‘agility-on-investment’, or ‘AOI.’ That is, the amount of agility gained from a particular investment,” says Clay.

The idea of adapting to a change in the environment and then utilizing ‘change management’ processes to execute the adaptation is no longer effective. “If you are adapting to a change, you are already in a follower position. As the Borders case demonstrates, that position can be fatal,“ says Clay. Many people are still operating in the mindset that “change” is some mysterious environmental phenomenon that must be adapted to, much like adapting to the weather by putting on a raincoat. Technology has obsoleted that mindset. "Today, ‘change’ is not some mysterious phenomenon—it’s your technology-enabled competitors. And you have two choices in dealing with them: 1) lead, or 2) lose. The traditional option of following and adapting doesn’t exist, anymore,” says Clay.
The winners in today’s market are the highly agile companies that are making change happen. Borders shows the fate of those who are not.

About Change Leadership Group and Brett Clay
Clay is the author of “Selling Change,” named the best business book of 2010 and best sales book of 2011, and he is the CEO of Change Leadership Group, LLC, a firm that helps clients improve their sales, marketing, and leadership capabilities. A veteran of 20 years in international sales and marketing management, most recently with Microsoft Corporation, he is an award-winning author, award-winning marketer, trainer, speaker, consultant, and business leader. http://www.ChangeLeadershipGroup.com.