The MariaDB Project today announced the availability of MariaDB 5.3.0 Beta. It includes a large number of features and additions while still remaining backwards compatible to MySQL®. 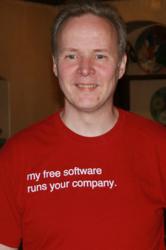 "The optimizer developers say it's the biggest change to the optimizer in ten years." -- Rasmus Johansson

The MariaDB Project today announced the availability of MariaDB 5.3.0 Beta. It includes a large number of features and additions while still remaining backwards compatible to MySQL®.

"There are many optimizer changes which makes this a very interesting release, because people will notice that their queries run faster," said Rasmus Johansson, COO of Monty Program Ab, a commercial backer of MariaDB. "The optimizer developers say it's the biggest change to the optimizer in ten years", he added.

A few highlights of the changes include subquery optimizations which allow subqueries to finally be usable and materialize. There are many join and disk access optimizations, including Classic Hash Join, Batch Key Access, Multi-Range-Read and Index Condition Pushdown. For fans of NoSQL, the HandlerSocket interface ships with MariaDB and 5.3.0 debuts support for dynamic columns (each row can have a different set of columns).

"We've spent years on many features, and I've even fixed some of my pain points," says Michael Widenius, CEO of Monty Program Ab and the original developer of MySQL. "Things like a better optimizer, progress reporting and dynamic columns have been on my bucket list for a long time and I'm thrilled that we finally have it," he added.

The beta release of MariaDB 5.3.0 is available for download at http://downloads.askmonty.org/ immediately. This MariaDB release is supported by a release partner, SkySQL Ab.

About Monty Program Ab:
Monty Program is the primary development driver of MariaDB, the Aria storage engine, and engineering excellence for MySQL® and other associated technologies. We are committed to
work with the community to plan, review, and release new versions of MariaDB.

About SkySQL Ab:
Affordable, enterprise class product support, professional services, and training for your MariaDB databases is available from Monty Program’s release partner, SkySQL Ab. To learn more about SkySQL and its services for MariaDB, visit http://www.skysql.com/products/skysql-enterprise, or email SkySQL at sales(at)skysql(dot)com.