The 25th annual IMTA Convention concluded this weekend in New York City. Models, actors, singers and dancers from around the world competed in modeling and talent events with 300 agents, managers and casting directors in attendance who were searching for new faces and judging the competitions. Michelle Paige from Philadelphia, PA is the winner of the prestigious IMTA Model of the Year. 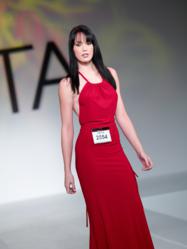 Grayson Gettys said, "Since competing at IMTA, I have been working in Paris and Milan and am based here in New York with Wilhelmina. It’s an amazing opportunity,"

Celebrating 25 years of IMTA Conventions was one of the many highlights of the week. Special recognition was given to the Agents, Managers and Casting Directors who have been at IMTA for the entire 25 years. Karen Lee, Joan Stephens, Arthur Bronfin, Clair Sinnet, Joey Hunter, Michael Flutie, Heinz Holba, Cynthia Kazarian, David Vando and Judy Savage were honored. The IMTA Member Directors who have been part of the IMTA for 25 years were also recognized: Diane Dick, Janie Head, Voloney White, Wendi Davis, on behalf of Margaret O’Brien, and Joe Rickie, on behalf of Rose Perez. IMTA also recognized Nancy Mancuso, Chief Operating Officer of IMTA, for more than 25 years of dedicated and inspired leadership of the Association.

For the 25th anniversary of IMTA, aspiring Models and Talent from around the world converged in New York City with the most influential Modeling Agents, Managers, Casting Directors and Scouts for one week at the renowned International Modeling and Talent Association Convention. At IMTA, the Models competed in Runway, Fashion Print, Jeans, Swimwear, TV Beauty Commercials and Makeup Competitions. The Talent competed in Monologues, Entertainment Host, Ready for My Close-Up, Sitcom, Commercial Print, Cold Read and Theatrical Headshots.

Tatiana Owens (IMTA 2007), whose music has been featured on MTV and VHI, returned to IMTA to perform her new single with background dancers/models who were current IMTA Contestants. Top models Grayson Gettys, Michael Fulfree and Zhanna (Project Runway) made appearances and presented Awards to the current winners. Michael Fulfree said, ”I came to IMTA in 2008 and I won Male Model of the Year. I signed with three agencies; Major, Next and Major Milan. It’s been a blessing to come here. Wherever you are the agents are around, they’re watching you.” Zhanna (IMTA 2004) said, “The best thing about IMTA was just the experience and walking down the runway for the first time. It was awesome. IMTA is the best thing that ever happened to me.” Grayson Gettys said, “Since competing at IMTA in 2009, I have been working in Paris and Milan and am based here in New York with Wilhelmina. It’s an amazing opportunity, that’s the best way I can say it. It was really exciting being on the runway, all eyes on you. IMTA is an experience like no other. Everything about it is amazing.”

IMTA covered the event all week long with live Twitter updates posted in real time. See IMTA's coverage on the Official IMTA Twitter Feed. IMTA's Official Blog also had frequent updates and Convention highlights during the week. At the IMTA Callback Day, the Agents and Managers had one-on-one meetings with the models and actors they had spotted during the week and discussed the possibilities of a career in the industry. Many contracts were signed and hundreds of careers were launched.

The IMTA Awards Night on Friday, July 22nd saw the announcement of the Models and Talent of the Year. This prize is awarded to the Contestants who have the highest overall composite scores. For more information on IMTA winners and events, please visit IMTA.com.

About IMTA:
IMTA is the most prestigious Association of Modeling and Talent Training Centers. IMTA produces two Conventions annually where Models, Actors, Singers and Dancers showcase their potential in front of the largest audience of Agents, Managers and Casting Directors ever assembled. Since 1987, IMTA has debuted an extraordinary number of modeling and talent stars who are working in the fashion and entertainment industry.

Contestants from all over the world come to IMTA to compete, including groups from Tokyo and South Africa (pictured here).

Ryan Lionberger, IMTA 2011 Male Model of the Year, competes in the Swimwear Competition at IMTA.

Teams of Models, Actors, Singers and Dancers perform at IMTA.