The YPO Global Pulse Index for the United States declined 3 points in the second quarter to 61.1 as confidence fell among the more than 1,000 U.S. CEOs responding to the survey. 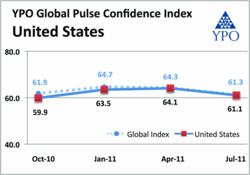 The relatively modest decline would indicate that CEOs have grown cautious, rather than pessimistic.

The YPO Global Pulse Index for the United States declined 3 points in the second quarter to 61.1 as confidence fell among the more than 1,000 U.S. CEOs responding to the survey. While the results show CEO confidence has clearly weakened, the decline was from the record high level for the U.S. series, which began with an index reading of 49.2 in July 2009 and one year ago stood at 57.5.

The survey results were announced today by YPO (Young Presidents’ Organization), a not-for-profit global network of 18,000 chief executive officers. The YPO Global Pulse is the only CEO economic sentiment survey to span the globe on a quarterly basis, capturing answers from more than 2,000 CEOs representing companies of all sizes. Altogether, the companies run by YPO members employ more than 15 million people globally and generate US$5.4 trillion in annual revenues.

Key Findings
CEOs Expect 2Q Slowdown to Continue. Only 46% of survey respondents thought economic conditions had improved compared with six months earlier, down sharply from 63% in the first quarter. Similarly, the percentage who said conditions had worsened vaulted to 17% from 10%. The darkened sentiment was spread across companies in all industries and all sizes. Consistent with the rear-view assessment, when asked to look ahead six months, the percentage of respondents who thought that economic conditions would improve dropped to 45% from 64% one quarter ago. The percentage that expected conditions to worsen doubled to 12% from 6%.

Sales Sentiment Slips Only Slightly. The view of economic conditions did not carry through with quite as much gloom when U.S. CEOs were asked about their 12-month sales forecast. The YPO Sales Confidence Index for the United States slipped only slightly to 67.4 from 68.9 in the first quarter, which was a record high level for this series. Companies in production and services reported only a modest drop in sentiment, while their counterparts in the construction industry were decidedly less optimistic. Less than half (48%) of CEOs in this sector expected sales to improve over the next 12 months, and one in five (21%) expected sales to decline. The sales outlook was consistently less upbeat across businesses of different sizes.

Employment Outlook Dips Lower. The YPO Employment Confidence Index for the United States, which measures CEO expectations about adding employees, also fell marginally in the second quarter to 58.7 from 59.5, which put it squarely in line with the global index for employment of 58.6. As with the sales index, the slight drop in the second quarter was from a record high level for the two-year-old series set in the prior quarter. This modest deterioration in the employment outlook was broadly consistent across firms in production, construction and services, as well as by firms of different sizes.

Investment Outlook Softens. The U.S. investment outlook also softened just a bit in the latest survey, slipping to 59.2 from a record high level of 61.3 in the first quarter. It stayed roughly in line with global investment index, which came in at 60.5. Capital spending has been the fastest-growing component of U.S. GDP for the last two years, and survey results suggest this will continue to be the case over the coming quarters. With respect to fixed investment, manufacturing firms anticipated little change and companies in the service industry might slow investment just a touch, while firms in construction reined in their projections far more substantially. One quarter ago, 45% of firms in the construction industry expected to boost capital spending in the next 12 months. In the latest survey, just 27% of CEOs in this sector said they plan to increase spending.

Commentary
“The 3-point drop in the U.S. YPO Confidence Index for the second quarter shows that CEOs are concerned that the slower growth registered in the first half of this year might continue through year-end,” said Dave Maney, member of the YPO Colorado Chapter and chairman and co-founder of Denver-based Headwaters MB, a middle-market investment bank. “But the relatively modest decline would indicate that CEOs have grown cautious, rather than pessimistic.”

“The negative shift in CEO sentiment is not surprising in light of second quarter events, which include the run-up in gasoline prices and the debt ceiling gridlock in Washington,” said Stephen Slifer, YPO Global Pulse economic adviser and chief economist at NumberNomics. “Against this backdrop, that the weakening of confidence wasn’t more dramatic could be viewed as fairly impressive.”

Global Results
The YPO Global Pulse Confidence Index for the second quarter of 2011 declined 3 points to 61.3. This followed a minute weakening in the first quarter. Nevertheless, at its current level, the global index is only a few points shy of its high of 64.7 recorded in January. The drop in confidence in the second quarter survey was seen across the globe, with the exception of Middle East/North Africa, which edged slightly upwards after falling 10 points in the first quarter. Asia was the most confident region, as it has been for five of the past six quarters, with an index of 64.9. The European Union was the least confident region, falling 2.4 points in the latest survey to 57.4.

YPO Global Pulse Confidence Index
The YPO Global Pulse Confidence Index combines CEO answers about expected and most-recent-quarter sales, employee numbers, fixed investment and business conditions. The index is centered on 50. An index reading below 50 indicates a negative outlook – the lower the number, the more negative the outlook. A reading above 50 indicates a positive outlook – the higher the number, the more positive the outlook.

Survey Methodology
The quarterly electronic survey, conducted in the first two weeks of July 2011, gathered answers from 2,070 chief executive officers across the globe, including 1,045 from the United States. Globally, 27% of participants are from large companies (more than 500 employees), 37% from medium-sized companies (100-500 employees), and 36% from small companies (less than 100 employees). By business sector, 25% of participants are from the production sector, 9% from construction and 66% from the services sector. For more information, go to http://www.ypo.org/globalpulse.

About YPO
YPO (Young Presidents’ Organization) is a not-for-profit, global network of young chief executives connected around the shared mission of becoming Better Leaders Through Education and Idea ExchangeTM. Founded in 1950, YPO today provides 18,000 peers and their families in more than 100 countries with access to unique experiences, world-class resources, alliances with top learning institutions, and specialized Networks that help them enhance their business, community and personal leadership. Altogether, YPO member-run companies employ more than 15 million people around the world and generate $5.4 trillion in annual revenues. For more information, visit http://www.ypo.org. See us also on Facebook and follow us on Twitter.