The 9/11 Patch Project's Manhattan to Manhattan Bus Tour left Manhattan Beach (CA) on January 25th, in route to Manhattan (NY), on a mission of remembrance, fellowship and fund raising by way of America's Fire Houses. 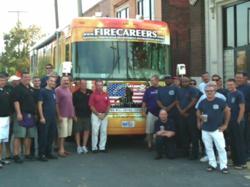 We hope to have the bus covered with names and logos by the time we roll into Manhattan, September 7th, 2011—there is still plenty of room.

(9/11 Patch Project) Vehicles and pedestrians along our nation's highways and cities have been doing double-takes the past 5 months as the 9/11 Bus (wrapped in photos of fire scenes with the unmistakable 9/11 Patch graphic on the hood) rolled through over 28 states, visiting with130 1st Responder organizations and communities, so far. From a distance, the bus appears to be on fire--but the only smoke coming from this bus is from its huge tires as it blazes a pace to the next hosted stop.

The bus, driven by FireCareers.com owner Craig Freeman and co-piloted by his wife Pam, bears the large words, FireCareers.com across each side. Fire Careers, a 28 year old national firefighter recruitment company, is the major sponsor for the 9/11 Patch Project. The two companies came together to confirm a clear message to American's across the nation, "We Will Never Forget." With the 10 Year Anniversary of 9/11, around the corner, both the Freeman’s and the 9/11 Patch Project founder, Brett Hill, felt it was time to take the message on the road--coast to coast.

The 9/11 Bus left Manhattan Beach's Fire Department on January 25th, in route to Manhattan (NY). The purpose of the cross country trip is to have fellowship with hundreds of 1st Responder organizations, record the hosted stops with group photo's in front of the bus and raise funds for the FDNY Bravest Scholarship Fund, the Terry Farrell Fund and the Feal Good Foundation. Funds are being raised through the sale of the 9/11 Patch Project's iconic patches and decals. The bus is also raising funds by applying the names and logos of organizations along the way through the "Don't Miss the Bus," sponsorship program. This also funds the cost to run the bus at nearly $2 per mile. More important, the names and logos on the bus sends a clear message to the FDNY and other New Yorkers, as the bus rolls into Manhattan, that organizations across the nation DID NOT FORGET.

9/11 Patch Project founder Hill says, "We hope to have the bus covered with names and logos by the time we roll into Manhattan, September 7th, 2011—there is still plenty of room".

The journey has not been an easy one and not always productive. There were stretches of highways near Nevada where the bus had to crawl through 2-3 feet of snow; there was the dodging of tornadoes and flood waters in Missouri and most of the trip has been under some of the nation's worst heat and humidity conditions on record. Many fire departments were taking care of business in disaster torn areas, so raising funds on behalf of the 10 Year Anniversary of 9/11 took a back seat at times in communities at times. Channeling funds to put cities back together and take care of broken families was much more important during stops in the various effected areas--Craig and Pam understood those needs and just provided support where they could.

On September 7th, the 9/11 Bus will roll into Manhattan. On the 8th, the bus will visit with the FDNY in Brooklyn and from the 9th though the 11th, the bus will spend time with the International Association of Firefighters Motorcycle Group and ride along with over 3000 motorcycles throughout Manhattan. Donations will be made to the three charities during this time as well.

The 9/11 Bus will begin its journey back home in late September, covering some of the areas that were not visited in the South, on the way back to California. The bus should arrive in California to a large warm reception in late October, after nearly a year on the road and over 20,000 miles or travel.

To support this national historical effort, please visit http://www.9-11patchproject.org Here, you will be able to purchase the fund raising patches, get your name or logo on the bus and view pictures and information of the various tour stops.